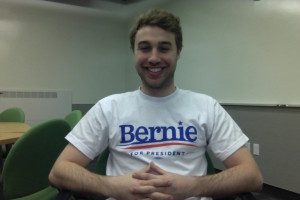 Meet Kenneth Seligson, a 1L at Golden Gate University School of Law. Originally from Middletown, New York, he has witnessed the effects of the drug war all his life, from seeing one of his closest friends die from MDMA use, having to send a family member to rehab, and to experiencing the legal consequences of the war on drugs firsthand. He became connected with Students for Sensible Drug Policy when he met SSDP alum Jesse Stout at the San Francisco’s Cannabis State Legalization Task Force. He decided to get involved with SSDP upon realizing that, although young people are often at the biggest risk of experimenting with substances like cannabis, there was no student or youth voice represented on the task force. The SSDP chapter of Golden Gate University School of Law has only been active for about a month, but Kenneth has already found a great deal of support, from students, his faculty sponsor, and community members. “Sensible drug policy means not criminalizing people who are either choosing to use drugs or who are somehow brought into a life of drug use. Sensible drug policy also means introducing programs that help treat the problem of addiction, and reintroduce people to a healthy social life.” This year, he hopes to work with drug policy organizations like Americans for Safe Access and National Organization for Reform of Marijuana Laws to inform people about how sensible drug policy can affect their lives, as well as the lives of those around them. “I want to stress to my peers, if you are better educated, you can make better decisions about your health and about your life. I want to send informational videos and scholarly articles to people on my email list –  even if only one person reads it, they will be better situated to make informed decisions.” In the future, as a practicing attorney, he hopes to become an expert in drug policy reform, advocacy, and help those communities affected by drugs and drug policy issues, whether it’s the heroin epidemic, or reforming legislation on psychedelics and Cannabis. To people who are thinking about getting involved with SSDP, he says, “You have nothing to lose and everything to gain, because even if your life hasn’t been affected directly, you will eventually run into it, whether you meet someone who uses drugs that are detrimental to their health and don’t have the tools or knowledge to learn about what they’re taking, or if you have someone in your family who needs medicine. Drug policy isn’t just policy about drugs – it’s about all types of social policy working together to help make people’s lives better.” Outside of his involvement with Students for Sensible Drug Policy, Kenneth loves snowboarding, and cooking is his second favorite hobby.