It is my absolute pleasure to introduce our newest chapter in Minnesota at Hamline University.  They have come a long way in a very short time, and considering how well-organized they have been and how quickly they have built up, I am confident that they will be doing some big things on campus. I spoke with chapter leader Gunnar Aas about what his team has accomplished so far and their plans for the future: 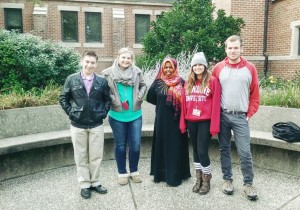 I first read about Students for Sensible Drug Policy on Reddit about two years ago, and immediately knew that someday I was going to join or start a chapter. One of my major reasons for going to university after finishing secondary school was because I wanted to be involved in student-organized and led political change in the world around me. I see the War on Drugs as a war on individual freedoms, community, and reason. Unfortunately, conversation about drug use and drug policy reform is still a taboo topic, when there is really no legitimate reason for it to be that way. I hope to help steer the conversation into a positive, fact based discussion in the state of Minnesota.

Hamline University is a school traditionally known for its progressive stance on social issues, and for its support of its students in their mission to create positive change in their community. Upon arriving on campus this fall, I was a little disappointed to find that the only political issues on campus that had any substantial mission or goals were those centered on race relations, LGBT issues, and sexual assault prevention. These are all great causes, and I mean not to offend anyone working for change in these areas, but for students who want to advocate for fight against policies that negatively affect people across all identities, or for students who don’t belong to one of these minority identities, like myself, it can feel like there is not a place for our political voice and ideas to be heard, recognized, and respected. As serious and effective drug policy reform is quickly becoming a legitimate possibility in many parts of the country, rather than a radical pipe dream, I feel that the formation of a SSDP chapter at Hamline University fills a void that did exist in the campus’s political landscape.

What has the reception been like on campus? From students, teachers, administration, etc.

So far, the reception on campus has been very positive. The student body generally seems to be very strongly in support of drug policy reform, but lost as to where their role in creating and advocating for this change is. One hope of our chapter this year is to show students that their political voice in advocating for these issues can be effective and legitimate. The faculty on campus has also been very supportive of what we’d like to accomplish this year. We have some amazing human resources available to us on campus, including Professor Mark Berkson, who teaches a class on drug policy reform, was very involved in the campaign to pass Proposition 215 in California, and served as the executive director of the Minnesota Drug Policy Reform Alliance. We hope to work very closely this year with all of the intelligent, resourceful, and open-minded faculty. Thus far, our conversations have not involved campus administration, but they have given us no indication whatsoever that they are unsupportive of our mission and agenda.

Our organization has many things we want to accomplish over this next academic year, and these can be divided into three distinct categories. One of the primary goals this year is to ease many of the anxieties that the university puts on students who choose to use. First, we would like to work with the university to redraft their vague drug use policies, so students know what to expect in terms of disciplinary action should that arise, and so that policies accurately reflect the potential risks associated with use and don’t increase the risks associated with student drug use. While HU SSDP neither condones nor condemns drug use, we recognize that marijuana use is common among American college students, and that the risks of alcohol consumption far outweigh the risks of marijuana use, and in drafting a new drug policy, the repercussions for such use should be made with that fact in mind. Due to Hamline’s unique location, one issue many students face is finding a place to use without fear of a law enforcement interaction, which has the potential to put their education on hold. As a result, many students choose to use in the surrounding residential neighborhood, or in their personal vehicles while driving. Out of respect for our neighbors, and out of concern for our peers health and safety, we hope to work with university administrators to designate a place on campus that students can use their relatively harmless drug of choice without fear of repercussions from campus police or the disciplinary board. Second, we want to engage our community and legislators in dialogue about drug use, abuse, and prohibition in our state. One event we are planning to host is a public dialogue for medical marijuana patients in the state to discuss challenges they have faced in navigating Minnesota’s medical access laws. We are planning this event in conjunction with Hamline’s effort to create interdisciplinary partnerships that involve public participation and digital media creation. We are planning to model our rival school, Macalester College, in holding an annual Hempfest for students on campus this spring. Third, we want to provide Hamline students with a venue to create real, tangible change in Minnesota’s drug policy. We plan to do this through cooperation with groups like NORML to attend and plan public events to discuss and advocate for drug policy reform.

So far, the hardest part of starting our chapter has been waiting to get started with the real work. About a month of planning went into starting the organization, recruiting new members, and filing the required paperwork to be considered legitimate with the university. We are happy to announce that, one month later, we are a legitimate student organize, are holding regular meetings, and ready to do all we can to end the war on drugs.

The most rewarding part of starting our chapter thus far has been the amazing conversations that have been had with other students and faculty members. One really exciting thing about drug use, and drug prohibition, is that it impacts people from all backgrounds in one way or another. SSDP is allowing conversations to be had, and friendships to be made between people who otherwise might never even cross paths.

What are you most excited about for your chapter/school/state/region/ssdp/drug policy right now?

Minnesota is an interesting situation, in reference to its history with drug laws, and its current drug law status. Minnesota, historically speaking, has been a very progressive state. In 1976, the state decriminalized the possession of small quantities of marijuana, a law that stood through Reagan’s revival of the war on drugs and still exists today. Despite this, Minnesota is still affected by all the negative side effects of prohibition, including destructive community to police relations, a thriving for profit prison industry, and the increased militarization of our police departments. This year, Minnesota’s medical marijuana laws went into effect, and are some of the most restrictive medical access laws in the country. People with serious illnesses in our state only have access to a small subset of the products available to patients in states with working medical marijuana laws, and at a price 3x higher than in those states, and 2x higher than street value in the state. Many patients have returned to the black market to purchase their medicine, showing that it is not effective. Legalization advocacy groups in the state remain few and far between, silent, and often times unprofessional in their approach to advocate for changes that benefit us all. I think Hamline University Students for Sensible Drug Policy has the potential to change the political landscape in regards to drug policy and drug policy activism in our state.

What is your vision for Hamline University SSDP? Where do you see your chapter in a year? in 4 or 5 years?

My vision for HU SSDP involves its growth and acceptance across campus as a legitimate political organization for students to get involved in. My vision includes successes in our goals and student involvement stretching past the leadership team. I hope that the organization lasts beyond my time at Hamline, and that there are successors to my leadership, and does not fizzle out like the previous Hamline SSDP chapter did over a decade ago.