I am thrilled to announce that SSDP has it’s first ever chapter in India at Jindal Global Law School! Chapter Leader Samyak Gangwal has gotten off to a quick start, conducting his first meeting just days after chatting with me about starting a chapter for the first time. He is excited to bring sensibility to a campus drug policy that he says desperately needs change and to amplify the voices of his peers who feel that drug policy needs to be grounded in a compassionate, scientific approach. I asked Samyak a few questions about his work thus far and his vision for SSDP at Jindal Global Law School: How did you hear about SSDP? I was disappointed with the policy that Jindal implements related to drugs and alcohol. I wanted to compare it with other universities across the globe. And Bingo! I landed up on the SSDP page which systematically graded policies of many universities. Why did you want to get involved/what made you decide to start a chapter? Having failed to convince the administration to do away with their zero tolerance policy and to implement simple logical policies like the good samaritan policy, I decided that a student-led movement would be necessary to bring about a change. This is when I decided to start an SSDP chapter. 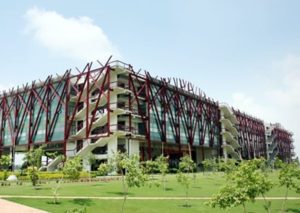 Jindal Global Law School, the site of SSDP’s first ever chapter in India.

What has the reception been like on campus? The reception has been positive from the student community. I haven’t yet approached the administration for necessary approvals so I can’t actually comment on that. What are some of the things you have planned or want to plan for next semester? Approval from the administration is the first priority. Then I’d like to generate enough support from the student community to get a good samaritan policy in place .Also, I’d like to team up with other established student groups to run a drug awareness drive at the campus. What is the most challenging part of your experience starting/running the chapter so far? Thankfully, the experience till now has been without any challenges. But that is only because the chapter is not yet recognized by the administration. I will soon approach the administration for the necessary approvals so that is when I suppose the challenges would come up. What is the most rewarding part? The most rewarding part has to be seeing SSDP chapters succeed all over the globe. It gives me hope for SSDP Jindal Chapter that even though starting from scratch change is possible. What are you most excited about for your chapter/school/state/region/ssdp/drug policy right now? Drug policy is one of the least debated topics in my region. Just the fact that SSDP would be at Jindal is pretty exciting. What is your vision for Jindal Global law School? Where do you see your chapter in a year? in 4 or 5 years? Every university in India has a zero tolerance policy for drugs. I hope that in a few years this would change and Jindal would act an example that others would follow. Ultimately, I hope that the chapter would also play prominent a role in changing the drug policy at the national level.