I am very excited to introduce our newest established chapter at Loyola University Chicago! I’ve been fortunate to get to know chapter leaders Ari and Rory over the past summer, and now that they are up and running, I cannot wait to see all that they accomplish in the upcoming academic year. They both responded to our new chapter interview, check it out! 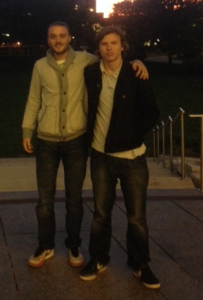 Ari: I was looking for groups that I could start at Loyola that were focused on drug policy change, then visited their website and reached out to Scott Cecil.

Rory: I met members of SSDP at the 2015 International Students for Liberty Conference, and they got me in contact with Ari. I ended up talking to him during the spring and over the summer.

Ari: I think that the drug policies on campus are outdated and reflect certain non-Jesuit values. At the same time, they support several state or federal-level agendas.

Rory: I believe the War on Drugs has been an egregious affront to civil liberties and basic human rights. I also think the Loyola community will be highly receptive to our message if they are more widely exposed to it.

What has the reception been like on campus so far? Judging from the attention garnered by the Facebook page, it seems like the community is responding positively to the group. We have received nothing but positivity from the administration. The two professors that we found to sponsor our group, Deborah Baskin and Ira Sommers, have been very supportive of the group’s overall message and its founding on campus. What are some of the things you have planned or want to plan for next semester? In the near future, we plan to hold a brownie handout to spread awareness regarding the effects of the prohibition of marijuana and other drugs. Another desire is to host a screening of “America’s Longest War”. For us, it is essential to have a place on campus where the community of Loyola can voice their opinions on the current state of the drug policies that our university requires to us follow. We intend to achieve this goal by tabling and eventually hosting meetings. What has been the most challenging part of your experience starting/running the chapter so far?  There were not any challenging experiences with Loyola when starting the group. However, we predict that there will be potential problem with the bureaucracy of Loyola; the university has very strict policies about being granted permission for activities, demonstrations, and tabling events. We also believe that getting any sort of fundamental policy change at our university will be extremely difficult and time consuming. What has been the most rewarding part? Knowing that we are working for a more just approach to the issues that our society faces with drugs is a great source of motivation for us; we find it very rewarding to be able to give that same power to the Loyola community. Hopefully, the dialogue that arises will cause the community to demand for future policies to reflect the Jesuit values that this university holds. What are you most excited about right now? We are most excited about seeing how the community reacts to the current drug policies that the university holds. Doing so will allow the chapter’s future actions to reflect the direction in which we envision those policies going. What is your vision for Loyola University SSDP? Where do you see your chapter in a year? in 4 or 5 years? The primary vision is to amplify the voice of the Loyola community so that the universities current drug policies may be more reflective of upholding the Jesuit values that they require all of the community to follow. In a year, we hope that the chapter has already made significant changes to the current policies we find to be contrary to the values that we as a community adhere to. Maintaining the persistence for this change will be one of the most important aspects of this chapter’s overall success on campus. Beyond that, we want to see the Loyola community demand for their surrounding area to be one that does not permit unjustifiable incarceration or fear of being caught under the influence of drugs.