I am so thrilled to announce our newest official chapter, all the way from Europe, the National University of Ireland Galway (NUIG)! This is our second chapter in Ireland, both founded by our International student Board member Graham deBarra. Graham has done a tremendous amount of work bringing SSDP and our mission to Ireland. He first founded the chapter at University College Cork (UCC) in 2012, and has been growing the movement there ever since. Thanks to the hard work of Graham and his chapter members, SSDP is now at 2 out of 5 major universities in the country. If we keep moving at this pace, Ireland might just become the first country in the world with SSDP chapters at every major university! I spoke with Graham about his experience building the chapter at NUIG; 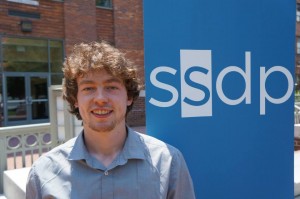 How did you first hear about SSDP? I first heard about SSDP through a friend of the SSDP UK network. I would keep in touch regularly with Levent Akbulut, the UK outreach officer at the time, and he provided me with all the help to set up my own chapter in Ireland. First we created a network called SSDP Ireland and then I registered a society (what we call “student organizations” here in the U.S) in the University College Cork last year. Now I set one up at NUI Galway. In the last three years we have gained three chapters and we continue to gain interest nationwide.   What made you want to get involved in the drug policy reform movement? In Ireland we have a serious substance abuse problem and throughout my youth and teenage years I have had friends addicted to tobacco, alcohol, amphetamines and heroin. Addiction usually begins at 12 years old for Irish people with tobacco and alcohol and it gateways into illegal drugs from there. In my opinion alcohol is the biggest gateway drug which leads to the most impulsive decision-making. It also happens to be that in Ireland we have the highest rate of use, yet for most people it isn’t even considered a “drug.” I was first interested in providing educational campaigns for students which value unbiased information and sound advice instead of scaremongering tactics. Most of our drug educational campaigns are funded by the tobacco and alcohol industries and so currently there is a huge bias of information that is distributed to young people. Aside from the need of educational reform is law reform. Drug laws in Ireland are based on the 1977 Misuse of Drugs Act which has become outdated. All laws evolve with the change in societal values. Young people today live in an environment that is very different to the environment in the 1970’s. Since this period we have seen a separation between church and State, reform of homosexuality laws, reform of abortion laws and reform of divorce laws. It is inevitable that as the State of the Republic of Ireland grows we will see a reform in our punitive drug laws. First and foremost I would like to see laws that favours the support of people with drug addiction, rather than a giving them prison sentence.

How has the reception on campus been so far? We are in our third week since our conception and we have 300 members with about 10% actively involved in campaigning and event planning. The medical professionals have personally sat down with me and together we are initiating health campaigns on campus. I have never received such a positive reception in any college before and I believe this will quickly become the largest chapter in Ireland.   What are some events and campaigns you have planned for your chapter? Our first event will host Howard Marks next week. He has legendary status in Ireland and the UK as one of the largest cannabis smugglers in history with ties in the IRA and MI6. This is strictly entertainment though. Otherwise we wish to host Portugal’s drug czar Dr. Joao Goulao, UCL professor Val Curran, criminologist Dr. Paul O’Mahony, Deputy Director of Harm Reduction International Damon Barrat. Ireland’s close proximity to the rest of Europe makes it very easy for us to reach out to the world’s leading drug policy reformists in which there is certainly no shortage of. We also wish to bring SSDP’s campaign global at the next Commission of Narcotic Drugs in Vienna. I went last year and it was great to represent our network on the international stage.   What is the most challenging part of your experience founding and/or running the chapter so far? Founding the chapter was surprisingly easy in NUI Galway in comparison to other colleges. The administration here has been amazing in helping us set up, and students here have a liberal mindset, with many activists willing to commit to the cause. The most difficult thing for me is to balance my ambitions with the actual funding that is available to us, which probably isn’t unusual among other SSDP networks. We plan to overcome this by organising fundraising campaigns which I feel can often be overlooked and neglected by college societies.

What is the most rewarding part? By far the most rewarding part is to inspire young people to speak out about issues that they feel strongly about. I think the most frustrating thing about being a student today is to have no platform to speak your mind. Thankfully this can now be constructively channelled for students of NUI Galway when they wish to discuss drug policy reform and this will be available for years to come. I feel this is important because many young people who start with this issue may transition their skills to many other civil rights issues during their student life and long into their future. This is fundamental to an active democracy.   What are you most excited about for your chapter right now? I am most excited about watching the movement in Galway grow from the ground up and to see our students develop their advocacy skills. We are only in our infancy at this stage so everything is ahead of us and we can only climb from here.   What is your vision for NUI Galway SSDP? What do you see your chapter accomplishing in the future? From my perspective I wish for the NUI Galway society to share ideas about different drug policy models and to advocate for the most efficient ones through effective grassroots campaigning. The effect will hopefully be to educate and empower other young people and to eventualy be heard on the local political level right up to national politics and State organisations.   — Please email graham@ssdp.org to learn more and get involved. Thanks!