I’m so thrilled to introduce our newest official chapter, Northwest Vista College in San Antonio, Texas! I spoke with chapter founder and leader Rafael Gonzalez about his experience so far and his vision for Northwest Vista SSDP moving forward:   How did you hear about SSDP? I first heard about the SSDP during a Town Hall Meeting here in San Antonio about the legalization of Marijuana in Texas. There was a member on the panel who worked for MPP (Marijuana Policy Project) and after browsing their website I came across the SSDP and absolutely knew I had to get involved in the movement. Why did you want to get involved/what made you decide to start a chapter? I’ve wanted to get involved in the Drug Policy Reform movement for a while now, even more so after my little brother was arrested and jailed for a small amount of marijuana. After that incident I decided I would do all I can to help fight the Drug War, and I happened to stumble upon the SSDP website. I called up the local Outreach Director and have since made it my mission to try to organize a resistance to these insane drug laws. 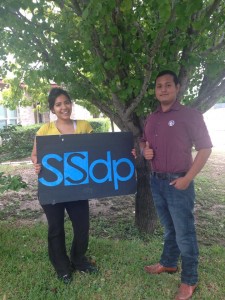 What has the reception been like on campus? From students, teachers, administration, etc. I’ve received a great reception from students, all of which have their own reasons for wanting to change the system. Teachers are another story; I had one teacher actually refuse becoming an adviser because he was afraid of “becoming a target”. This only inspired me to work harder to achieve our organizations goals, and change the public perception of people who are trying to change drug policy. What are some of the things you have planned or want to plan for next semester? We expect to hit the ground running next semester, on top of holding a “marijuana week” at the school to better inform students, we will also be contributing to the community by preforming community services across San Antonio, registering people to vote, as well as contacting local and national representatives in hopes of influencing the political process. What has been the most challenging part of your experience starting the chapter so far? The most challenging part of starting a chapter was coming up with ideas on how to get people involved. I was pretty much alone in the beginning, and at many times I even questioned if it was even worth my time. After receiving extremely positive reactions from students while hosting a table, I was even more inspired to continue than when I first started. What has been the most rewarding part? The most rewarding part of it all is the fact that I, as well as everyone in the organization, can say that I am not standing idly by as millions of our fellow citizens are being wrongfully imprisoned and having their freedoms taken away.
What are you most excited about right now?
I am most excited about networking and working together with other groups and organizations in Texas. The Marijuana Legalization movement has been gaining a lot of steam here in Texas, and contrary to popular belief, I believe that by working together, and working hard, we can achieve some major progress really soon. I cannot wait to start bringing our organization’s skills and talents to the table in Texas.
What is your vision for Northwest Vista SSDP? Where do you see your chapter in the future?
In 4 to 5 years I see our local chapter growing and spreading to all of San Antonio’s Alamo Colleges, soon we will not be know as Northwest Vista SSDP, but as the Alamo Colleges SSDP Network, with 5 different school working together to help make positive change in San Antonio’s drug laws, as well as our nations laws.   Are you a student at Northwest Vista? Get involved!