The movement for sensible drug policy has officially spread into China! I’m thrilled to introduce everyone to the newest SSDP chapter at NYU Shanghai. I had a chance to meet with the students starting the chapter over the summer and was impressed with their passion towards ending the drug war. NYU Shanghai features a very diverse student body from all around the globe and presents a unique opportunity to engage young people in discussions around drug policy reform in a country where such discussions are frequently censored.  I spoke with chapter leader Shayla Schlossenberg about the chapter’s work so far and their vision for NYU Shanghai SSDP over the next several years. How did you hear about SSDP?  I first heard of SSDP at the 2015 DPA Reform conference! I then met folks while studying abroad at NYU NY, and I participated in the Walk to End the Drug War this summer in DC. Luke Noel actually reached out to me a semester ago with interest in starting a chapter. Why did you want to get involved/what made you decide to start a chapter? I have a fair amount of work experience in harm reduction (volunteering with Baltimore Harm Reduction Coalition, spending 15 hours a week at St. Ann’s Corner of Harm Reduction, and working full-time over the summer at HIPS), and I wanted a platform for my peers to learn about drugs and local laws, as well as advocate for better on-campus policies. I am unsure how much greater community advocacy we will be capable of, but making positive change on our own campus seems like the best starting point. Like I said, Luke reached out to me, and he has more advocacy experience, but I was interested in a stronger harm reduction push for the school — we make a good team. What has the reception been like on campus? From students, teachers, administration, etc. I asked one administrator about good samaritan policies on campus and he frowned and asked why I needed to know. To be fair, I don’t think I am the administrators’ favorite student on campus. Teachers and students have been very supportive, though! What are some of the things you have planned or want to plan for next semester? 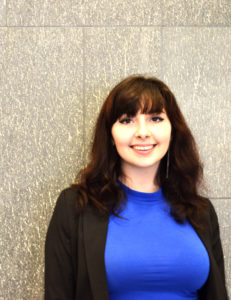 Chapter leader Shayla Schlossenberg has a lot of experience working in harm reduction, including spending this past summer in Washington, DC working full-time with HIPS.

So far we are hoping to table during Ally Week and discuss how different groups of marginalized people are harmed globally by the War on Drugs. I am hoping to do some journal shares soon and get some bilingual Know Your Rights cards out for the campus community. I would love to also have postcards like DanceSafe, but with Chinese information on the back, as common names in Chinese on the front. What is the most challenging part of your experience starting/running the chapter so far?  It’s a bit early to say, but based off of our first meeting I would say it will be gauging student body interests. Our school is very small (1,200 students I think) and 1/4 of the school is studying abroad at any given moment. There’s also a fair amount of disconnect between students of different grades due to the mandatory study away time. So, it is hard to reach out and figure out 1) where interests lie, 2) what are the most pressing drug-advocacy related needs on campus, and 3) when people are free to meet. What is the most rewarding part? Again, it is very early, but the one on one conversations I have had with students so far have been really enthusiastic about making tangible differences in school culture — such as getting our health and wellness center to be more student-centered (taking a harm reduction approach). I have also consulted with two faculty members at the school who had a lot of good information to offer regarding future events and how to get in better touch with underclassmen (Luke and I are both seniors that recently returned from studying abroad). What are you most excited about for your chapter/school/state/region/ssdp/drug policy right now? I am really excited to get some bilingual educational materials made – it’s something that could easily start within my school but soon be distributed to campuses all over the city, and then to other spaces if possible. I don’t want to see us limited to simply our own campus, but I do want to make sure we aren’t getting into any hot water. What is your vision for NYU Shanghai? Where do you see your chapter in a year? in 4 or 5 years? My hope is that in a few years, we will be working actively with other school campuses to create better campus environments for students who do use drugs and dispel harmful stigma from the community at large. Breaking down moral beliefs about drug hierarchies, understanding local laws better, and revamping drug education for incoming students are all things that seem feasible within the scope of a year or two.