I am pumped to introduce our newest chapter in New York at Rensselaer Polytechnic Institute! With the addition of RPI, SSDP now has a presence on 18 campuses in New York, one of the highest totals of any state in the country. In the month since this chapter started up, I have been blown away by their organization, compassion, and dedication to bringing sensible conversations and policies around drugs to the Troy community. I spoke with chapter leader Matthew Getzin about what his team has accomplished so far and their plans for the future: How did you hear about SSDP? As a member of the MAPS Graduate Student Facebook group, I have been exposed to a bunch of great opportunities for learning about and getting active in changing the state of drug policy and drug research in America. I’m not sure of the exact post, but I ended up on the SSDP website in early September and it’s now a month later we’ve had two meetings and a Guest Speaker event scheduled! Why did you want to get involved/what made you decide to start a chapter? For the past 6 years, I have slowly become more and more enlightened about drugs and the origins of the current drug policies. Over that same amount of time, my angst and desires for change have also been growing and becoming harder to ignore. Both of these mechanisms of growth intersected last month when I decided that it was time to for me to take an active role in my reality and get involved with SSDP. What has the reception been like on campus? From students, teachers, administration, etc. As some may have noticed by my Facebook posts, I have been quite anxious about the reception SSDP has here on campus. In general, a growing number of students are making themselves visible and reaching out to become involved with our chapter. We have also started to establish relationships with other student-run organizations on campus, e.g. Active Minds of RPI, as well as institutional organizations, e.g. RPI Student Health Center. Although we are still in a primarily planning and focusing stage, our interactions with these groups have thus far been cordial and synergistic in nature. 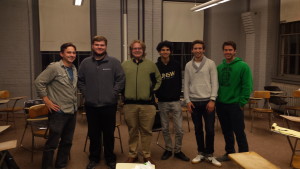 What are some of the things you have planned or want to plan for next semester? Although we have discussed getting involved in a number of campaigns on campus, we seemed most interested and immediately prepared to organize seminars and disseminate truthful information regarding various drugs and their policies as well as foster safe environments for open conversations regarding these topics. For example, we have already organized a guest speaker, Lex Pelger of Psymposia, to speak to us next week on a number of topics ranging from endocannabinoids to racism at the heart of the Drug War. Also, we would like to seek out and replace any misinformation about drugs  (no matter the media) that is given to students on campus with truthful and scientifically sound information. What is the most challenging part of your experience starting/running the chapter so far? Although our cabinet was formed at our first meeting (without consulting the complex constitution), the biggest challenge has been getting the other members of the chapter to take an active role in organizing activities, drawing up our constitution/budget/etc, and handle the basic administrative duties that keep an organization like SSDP running like a well-oiled machine*. I think motivation and excitement in this kind of work can be contagious, so I’m doing my best to remain diligent and continue delegating the work to people that want to be involved. What is the most rewarding part? The most rewarding part for me so far was having people show up to the first meeting validating my efforts in reaching out to other groups and putting up posters. We even had an administrator from the Student Health Center attend which was very advantageous as she had a number of insights into our current policies on campus including the 911 Good Samaritan Policy. She also served as outside perspective, which is increasingly valuable. What are you most excited about for your chapter/school/state/region/ssdp/drug policy right now? I am most excited for other people to get involved as much of the advances up to this point have been a product of my individual efforts*. When others catch this activist bug, the progress will be faster and SSDP at Rensselaer Polytechnic Institute will have many opportunities to make positive changes on campus and in the Greater Capital Region (NY). What is your vision for RPI SSDP? Where do you see your chapter in a year? in 4 or 5 years? As a general rule, I am not a big fan of looking too far ahead as the future is fraught with the unexpected and unaccountable. That being said, I’d like SSDP to be a respected group at Rensselaer Polytechnic Institute by getting involved in the Drug and Alcohol Education programs for incoming students/pledge classes/etc., holding regular educational seminars and events, volunteering in relevant campaigns in the community, and setting an overall high bar for student groups in general.   *I was editing these responses just hours after our second meeting. I am already happy to report that, in my absence, the rest of the Board of Directors did a fantastic job attending to our most pressing action items while I was at a local town hall meeting to see what kinds of opportunities are available for SSDP at RPI to make a difference in the community.