Our newest official chapter is at Rhodes College! The chapter, based in Memphis, Tennessee,  and founded by neuroscience student Tyler Marshall, is currently our only active chapter in the Volunteer State. I spoke with Tyler about his experience so far and his plans for Rhodes SSDP moving forward;   How did you hear about SSDP?  Strangely enough, I first heard about SSDP when I was writing a paper for my brain disorders class. I emailed a Dr. Sewell, a Yale university psychopharmacologist asking about how MDMA doses in rats (mg/kg) translate into human dosages. He answered my question, and I told him that I was interested in MDMA assisted psychotherapy and understanding neurotoxicity. He then gave me the information and then recommended SSDP if I was interested in further research. Why did you want to get involved/what made you decide to start a chapter? Many reasons; the main reason is having a clear understanding of the injustices and harms generated by pseudoscientific and politically motived drug policy. High-pressure drug policy doesn’t make addiction go away nor does it make folks any safer. It drives the problem underground and prevents high-risk people from getting educated and seeking treatment. It sort of puts a suffocating blanket on the issue. Moreover, most of us here in Memphis have dealt with a good friend being injured, killed, expelled or arrested from a drug mishaps or overdose etc. All of which could have easily been prevented by education and safety-first oriented policy. 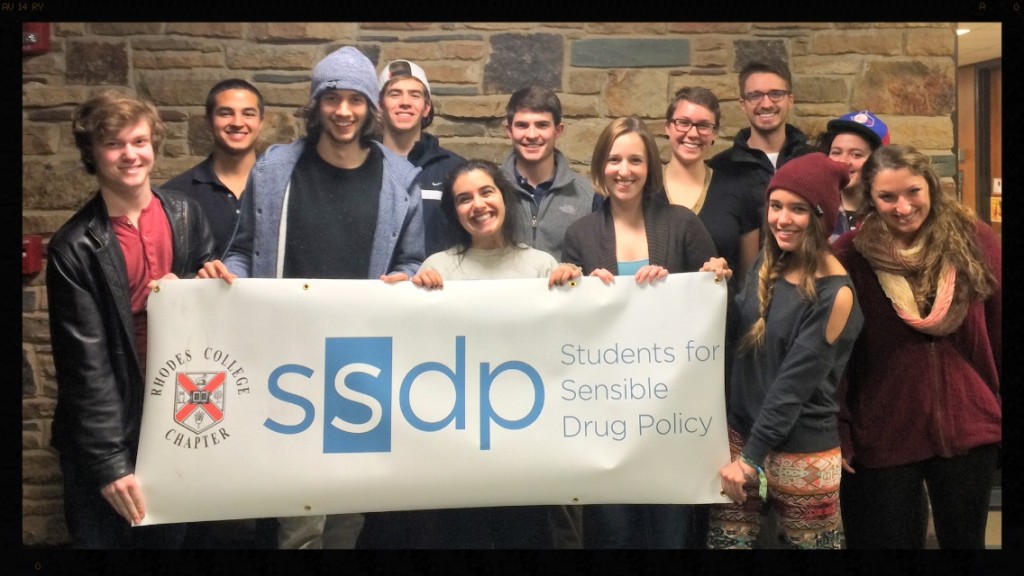 What has the reception been like at Rhodes so far? So far we haven’t blasted promo on SSDP yet, though people are finding out it exists. Rhodes has a world-class student body, so we’re blessed to have extremely open-minded and tolerant people here at Rhodes. The student government accepted us almost immediately. We made our goal of harm reduction as clear and professional as possible. Thus, it wasn’t really a problem. We think Rhodes is a great environment for SSDP to thrive. What are some of the things you have planned or want to plan for next semester? At the moment we’re primarily focused on education. Our design is to create a smaller core group of students that are trained to think critically and objectively about drug issues. Our vision plan is to be open-minded and laid back, but approach the issues in a scientific voice as well. After we feel more comfortable as an organization, then we’ll move into lobbying for issues that we collectively agree on. We’re eager to learn. What has been the most challenging part of your experience starting/running the chapter so far?  Organizing all of the information for meetings has been a chore. “Where the hell do we start?” –is a common thought while planning the meetings. There’s so much wrong with policy, and so much to learn. We came to a consensus that the premise of drug policy starts in being aware of the pseudoscience that influences currently policy, especially in the drug scheduling system. We also strive to understand the developing science of how drugs really work in the body. So that is sort of our epistemological core that we plan to build on. What has been the most rewarding part? It’s a lot more rewarding than doing school-work! No, but seriously, we’re really stoked on the strong possibility that our grueling and ‘extra hardcore’ education at Rhodes is actually going to help people. As person that is obsessed with electronic music, I’ve seen a lot go down at parties. Thus, helping people educate themselves and make vital health choices is a sweet feeling. We want intelligent and informed conversation to rise to a huge level. What are you most excited about right now? We’re the first collegiate organization of its kind in Tennessee and we’re pumped to break the ice on these taboo issues. Our university is well respected in this area, and we hope we can make at least a dent in the stagnant and archaic ideology in our region. What is your vision for Rhodes College SSDP? Where do you see your chapter in the future? I hope we can lead other Universities to develop similar organizations around the region. I also want the dialogue facilitated at our meetings spreads accurately across this network. Hopefully sturdy and unbiased scientific information will travel deep into brains of politicians and other leaders as well 🙂 Although, first, we have to build a young student body since many of our leaders are graduating soon. So we have a lot of work to do!   —- Are you a student at Rhodes College? Get involved!