I’m pumped to introduce our newest established chapter at the State University of New York at Buffalo! I spoke with chapter leader Gabriela Zappi about her experience so far and her plans moving forward:   How did you hear about SSDP?  I heard about SSDP from a friend at NYU where I used to go to school who got me involved in the club.   Why did you want to get involved/what made you decide to start a chapter? Upon initially learning about SSDP I started becoming aware of the vastness of the war on drugs and also how ineffective it’s been. It sort of opened my eyes to the systematic problem I think we have (mostly in the US) surrounding drug use, prohibition and the way we look at abuse and addiction. When I came to Buffalo, I thought it was important that I bring SSDP here and hopefully incite some sort of change, even if only on a very local level.   What has the reception been like on campus? From students, teachers, administration, etc. The reception has been great!! Most people here had never heard of SSDP so it’s really interesting to see peoples’ reactions and support when we explain what we’re doing. A great moment was when we were having a bake sale and this woman who works with substance abuse patients came up to our table and told us how much she really appreciates what we’re doing and wishes there were more student groups like ours.   What are some of the things you have planned or want to plan for next semester? First thing next semester we’ll be raising the funds so we can make it to the conference in DC in the fall! (fingers crossed). Also we’ve started collecting cigarette butts for our campaign against the “smoke-free” policy on campus.   What is the most challenging part of your experience starting/running the chapter so far?   Definitely getting our membership up. I think we (the three other chapter leaders and I) underestimated how hard it would be to reach people and get them to be active. But we’re getting there. 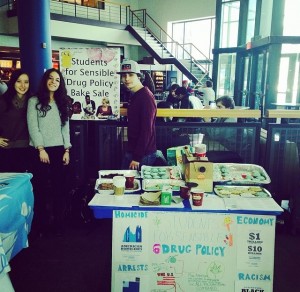 What is the most rewarding part? There are lots but I really enjoy the feeling after we’ve had a successful meeting and I feel like in our discussion we’ve made big steps even if that just means learning something. I’ve been really impressed by our members and how much information/experience they have to share.   What are you most excited about for your chapter/school/state/region/ssdp/drug policy right now? Right now we’re really pumped about med mar in New York State and on a broader level psychedelic-assisted therapy and other research with psychedelics.   What is your vision for SUNY Buffalo SSDP? Where do you see your chapter in a year? in 4 or 5 years?  It’s hard to say but I think there are lots of opportunities for our chapter to get involved in policy change on the local level in Buffalo, which has had a bit of a past in terms of racial disparity and crime, especially in the area right around our campus. Hopefully in four or five years we will have a significant membership and the active board will be as passionate about SSDP as we have been!