Please join us in welcoming our newest official chapter, Texas A&M Law School! I spoke with chapter founders and leaders Kayla Brown and Zack Brown about their experience so far and their vision for the chapter moving forward:   How did you hear about SSDP? I first heard about SSDP while in undergrad at Kansas Wesleyan University. I was at a debate trip when a good friend from the debate circuit told me about SSDP and the things the organization stood for and worked to change. Why did you want to get involved/what made you decide to start a chapter? I got involved with SSDP while in undergrad by helping to start a chapter at Kansas Wesleyan University. I have always had a passion for drug policy reform because the current approach has proven to be unsuccessful and done more damage than good. After Kayla Brown and I had discussions about drug law reform, I found out she was starting a blog on marijuana law so I told her about SSDP. The two of us decided to look into starting a chapter at the law school to use our position as future lawyers to voice our opinions on the subject of drug policy reform in Texas and in the U.S. Both Kayla and myself are extremely passionate on this subject and could not be more excited about starting this chapter of SSDP. What has the reception been like on campus? From students, teachers, administration, etc. We have had such an amazing reception on campus from students, professors, and administration. We, along with the Federalist Society and the American Constitution Society, recently held a lunch event called “Clearing the Air on Marijuana Reform” and not only did we have to bring in more chairs then planned but by the start of the event there was standing room only. 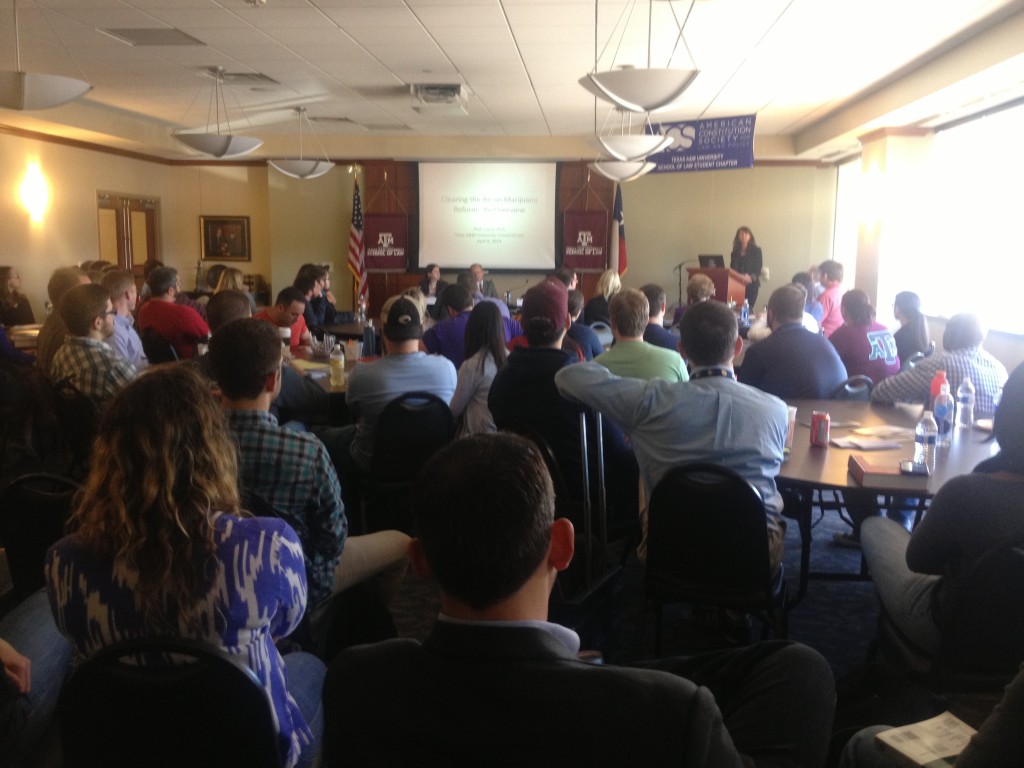 What are some of the things you have planned or want to plan for next semester? We have discussed a few things we are looking to plan for the upcoming semester(s). We want to host a debate on marijuana law reform with multiple sides represented (one side arguing for the status quo, one side for decriminalization/medicinal use only, and full recreational legalization). We are also looking to work with the new Criminal Law Society on campus to host a drug law symposium in the spring semester. What is the most challenging part of your experience starting/running the chapter so far? In terms of starting the chapter, the most challenging part so far has just been jumping through the hoops the University has in place for starting a new organization, but they have been extremely helpful in getting us through all of these hoops. What is the most rewarding part? Seeing the passion and support we are receiving from so many students and professors on campus, it has been so rewarding to see so many others have such strong opinions on drug law reform. What are you most excited right now? I am extremely excited about our chapter creating lawyers who have a passion in promoting drug policy change in Texas and the U.S. I am also excited about the experience we as future lawyers can gain in the marijuana legal field with legalization in Colorado and Washington because the law for the various aspects of marijuana is widely unsettled with many things that will be need to be resolved as the movement goes forward. What is your vision for Texas A&M Law SSDP? Where do you see your chapter in the future? I vision this chapter being one of the most active chapters of SSDP that truly promotes change in drug policy not only in our own state but also nationwide. I also hope to see this chapter finding creative ways to discuss, research, and debate the legal issues surrounding drug policy changes. I hope that this chapter always looks to bring in various speakers and promote education on drug reform law for the campus and for the community.