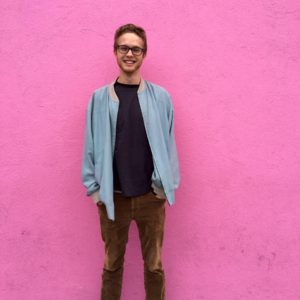 Meet Christian Kramme, the chapter leader of Students for Sensible Drug Policy at University of California Los Angeles. He is a sophomore majoring in Microbiology, Immunology, and Molecular Genetics. About two years ago, he started Green Box Medical Nonprofit with his father, a company that aims to sell cannabis through the  vending machine, an innovation fit for the changing cannabis industry in a modern world. Currently, he is collaborating with the UCLA Cytogenetics Laboratory to conduct research on making the legal market of cannabis safe and effective in the United States. He decided to get involved with Students for Sensible Drug Policy because he realized that without changes in drug policy, it would be impossible to create an effective legal cannabis market. His older brother, who got involved with the Adult Use of Marijuana Act (AUMA) at UC Berkeley, connected Christian to the movement. To Christian, sensible drug policy would not punish people for the use or possession of drugs, no matter what the drug is. “In America, it’s unfortunate that we look to punish and criminalize drug use instead of treating it as a health or addiction issue. Putting people in prison, where they might be exposed to more drug use, is never effective.” He continues, “We always get emails from the UC that if we get caught with cannabis, we’ll get stripped of financial aid. To take away scholarships for education because of drugs is not very sensible.” This year, he hopes to cultivate an open discussion about drugs and drug policy at UCLA. He feels that compared to UC Berkeley, UCLA is completely shut off from sensible conversation on these issues, in that the primary message that students receive is that drugs are bad and will kill you. He wants to educate the student body on where the current industry is, what drug policy has done, where it’s been destructive, and where it can be beneficial. To other people who are thinking of getting involved with SSDP, his biggest piece of advice is, “Just do it! So many people have told me, ‘Christian, you’re not an engineer, you’re not a businessman. They say I can’t do it, and then they’re like, ‘Oh wow, you’re actually doing it.’ With drugs and drug policy reform, nothing’s going to be done if people think, ‘This should be changed,’ but nobody actually does anything. So go do something, whether you talk to a friend about it or sign a petition. Get people talking, because if you do, things will actually change.’” Christian doesn’t just talk the talk, he walks the walk. During his first week of organizing on campus, he recruited 15 people to the budding chapter. His fun fact? “I once played the main murderer on CSI New York. I killed my mother in that episode in 2010.