SSDP is growing every day. Students across the country and world want to be a part of this growing movement of young people working to end drug prohibition. They come to us regularly, eager to start changing opinions and laws. We are especially excited to be growing our network in Florida, as the state is a hotbed of drug policy reform with the United for Care campaign currently in the process of getting a medical marijuana initiative on the 2014 ballot. Chapter founder and leader Teresa Pugliese first got in touch with us this past summer and has been working hard ever since, building the UCF chapter. I spoke with her about her experience so far and her plans and vision for the chapter moving forward;

Once I found SSDP, I knew I had met my organizational counterpart. Starting a chapter was almost instinctual.

How did you hear about SSDP? I came across the SSDP website while I was researching for my simulation class. My topic of choice was overdose prevention, where I was constructing a model for a simulated design of the prevalence of drug overdose within communities in order to determine methods of prevention to invest in. The many resources and information provided on the SSDP site became the framework of my study. It was while I worked on the project I was able to become acquainted with SSDP’s ideology. Why did you want to get involved/what made you decide to start a chapter? The ideas and principles driving SSDP are dedicated to addressing issues I had already been concerned about and personally invested in. Once I found SSDP, I knew I had met my organizational counterpart. Starting a chapter was almost instinctual; once I realized an active chapter was not associated with UCF. I, without hesitation, found myself laying the groundwork for the creation of one. I couldn’t imagine the second largest university in the United States not having the presence of a SSDP chapter on campus. 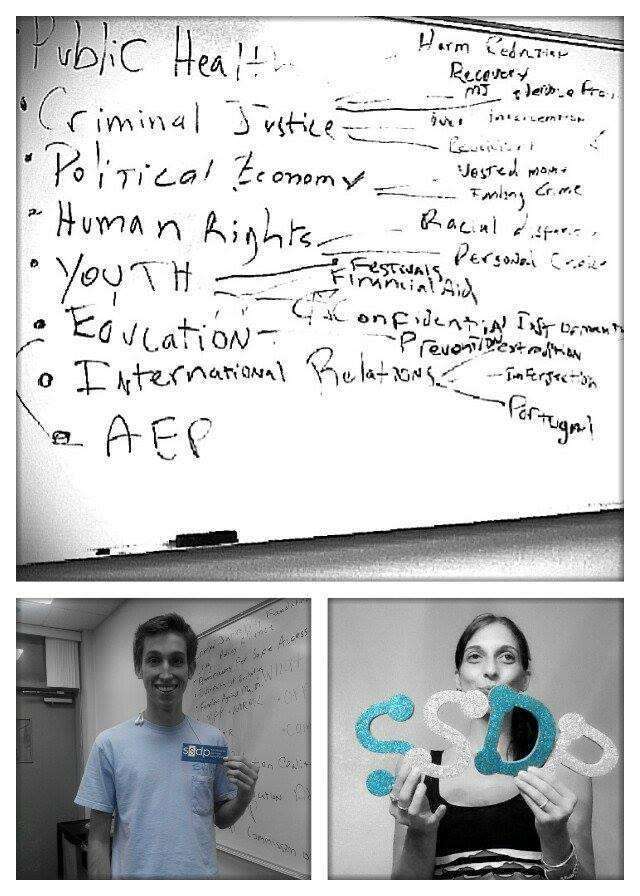 What has the reception on campus been like so far? The reception has been interesting to say the least; everyone is excited when presented with the idea of a new organization on campus. A lot of feedback has been positive and supportive with motivated intentions of involvement, though I still find that some of those I speak to about SSDP resilient as soon as they hear the word ‘drug’. At first this was discouraging, but I finally reached the point where the rejection from closed minds only helped me realize how important it is to continue the pursuit of providing facts and awareness to the campus. What are some of the things you have planned or want to plan for next semester?  I would like to establish a respectable presence on campus with a solid foundation of passionate students ready to put effort into changing and saving lives. From there, we will be focusing on the 911 Good Samaritan policy. As of right now, UCF has an ambiguous, shaky and almost misleading form of alcohol amnesty. The incongruence between what is stated in writing in the Golden Rule Book and what is being vocalized to UCF freshman at orientation is exasperating. Working on establishing straight forward and ethical policies will be the first and main focus of SSDP at UCF, with the hopes of expanding the policy to cover more than just alcohol. What has been the most challenging part of starting your chapter so far? Aside from the immediate resistance to the subject matter by students when first approached with the idea of SSDP, I would say that the most challenging part has been learning the operations and structure of UCF’s bureaucracy, which we need a clear understanding of in order to maneuver through, and to introduce the changes in policy and practice that we envision. What has been the most rewarding part?  The most rewarding part is watching the work put into SSDP by dedicated and concerned individuals slowly invade the campus and inspire the students at UCF to get involved so we are able to achieve what anyone starting a new SSDP chapter could hope for; recognition, interest, and the achievement of facilitating desperately needed open discussion regarding issues which are pertinent to the lives of students. 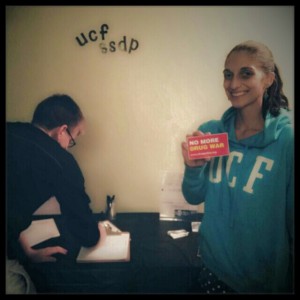 What are you most excited about for your chapter right now? Aside from the fact that I have received the amazing opportunity to attend the Drug Policy Reform Conference in Colorado this month, where I know I will be coming back from overflowing with knowledge, ready to pour out to the UCF population; I am simply excited to have an active role in the advocating of sensible drug policy. I am excited to be having meetings that promote open discussion about topics where opinions are usually kept private. It really provides the atmosphere of stimulating engagement and collaboration of ways that we, as a chapter, can work together to diffuse the negative effects of the current drug related policies.     What is your vision for UCF SSDP? Where do you see your chapter in the future? My vision for SSDP at UCF is for it to thrive long passed my days as a student. As I have limited time left before graduation; I hope to utilize the next couple semesters with actions that will provide the foundation for a strong and sustainable chapter. I envision considerable growth through the continuance of awareness, the motivation for action, and the passion for change in the years to come.   — Are you a student at UCF? Get involved in this chapter!