I’m very excited to introduce our newest chapter in the Northeast region, Yale University! Chapter leader Clement Dupuy contacted us about a month ago about getting a chapter started up and has been working hard to create an established SSDP presence in New Haven. SSDP now has three chapter at Ivy League schools, with Brown University and University of Pennsylvania being the other two. I asked Clement some questions about his progress so far and his goals for the future of SSDP at Yale: How did you hear about SSDP? For years I had been doing research on the drug war and I came across various organizations like the Marijuana Policy Project and Drug Policy Alliance as well as several other independent sources. As I became more knowledgeable I also became more motivated and had the amazing opportunity to do an internship at DPA but when that came to an end, I knew that there was no way to easily translate the work DPA does onto campus. So I began looking around for student organizations that had similar goals as me and voila! SSDP was right there and already full of the kinds of people I wanted to work with and with the resources and drive that would be needed to get things done. While I’ve never formally or even unofficially collaborated with SSDP in the past, I’m thrilled that I get to be a part of the organization now and bring its good work to Yale’s campus, where it is sorely needed. Why did you want to get involved/what made you decide to start a chapter? While I was always intellectually engaged in combating the drug war, the fight became personal for me my sophomore year of college, when the penalty I received for committing a nonviolent drug offense was far harsher than the penalties the university usually doles out to perpetrators of vandalism, theft, assault, and rape. Because I have a formal disciplinary record with the university now, I must disclose it to all future employers for the rest of my life (at least if they ask). Because Yale is a private entity, it is not held to the same due process standards as public institutions are, and so my ability to get a fair hearing and secure an impartial ruling was stifled to see the least. Seeing the perverse, counter-intuitive and counterproductive policies of an institution ostensibly guided by reason, the only recourse I had was to make sure that no other student suffers the same fate I did. I knew that working with a group aligned with my values and goals that already had the infrastructure in place to effect meaningful change would have a greater impact than if I just worked on my own, so I decided to bring the good work of SSDP to Yale’s campus. 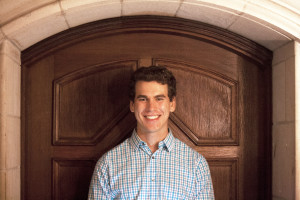 What has the reception been like on campus? From students, teachers, administration, etc. So far the vice president and I are still figuring out our vision and goal for this upcoming year and we are navigating the challenges of starting an organization on campus. As such, we have not had a great deal of publicity just yet. That said, we are slowly but surely discovering that there is pent up demand for change among the student body that has yet to be given a way to express itself and we are confident that we can rally significant numbers of people to our cause as the semester goes on. What are some of the things you have planned or want to plan for next semester? At last count, Yale received a C- on its drug policies from SSDP, and for good reason. While the university has a commendable amnesty policy for alcohol related incidents, it offers no such protection to students who experience emergencies as the result of use of other drugs. Our top priority for this semester and the next will be to implement a sound amnesty policy to keep students safe and prevent the tragic injuries and loss of life that stem from the lack of amnesty policies. After that, we hope to move on to other important issues, particularly as they relate to mental health, and our goal ultimately will be to ensure that no student is suspended or expelled from campus for a nonviolent drug offense. We hope to have such offenses treated the same as underage drinking, and at the very least we hope to correct the skewed “incentives” (for lack of a better word) in the current policies whereby a student found guilty of rape gets off with a written reprimand (i.e. no permanent disciplinary record) while a student who smokes the occasional joint can be kicked off campus. What is the most challenging part of your experience starting/running the chapter so far? The greatest challenge so far has been getting the word out and getting off the ground in terms of official university recognition. Unfortunately, due to the fast schedules of registration, we missed the deadline to be recognized as an official university organization for this semester which has put a damper on our efforts to recruit, but we have already started working on our application for next semester and we’re using alternative ways to get the word out and recruit that don’t require being an officially sanctioned organization. What is the most rewarding part? So far, the most rewarding part is knowing that we are fighting for a good cause that is gaining momentum. I am always inspired by my bright and motivated peers and am confident that we can harness our collective talents to improve drug policies at Yale, in New Haven and hopefully throughout the state of Connecticut. What are you most excited about for your chapter/school/state/region/ssdp/drug policy right now? I’m most excited to launch a grassroots campaign on campus to reform our amnesty policies. In the long term I hope to be working on several goals simultaneously, particularly implementing methadone/buprenorphine clinics in the city to combat the rising heroin epidemic, but I’m excited to know that we can prevent serious harm and have a meaningful, positive impact on students’ lives if we succeed in changing these policies. What is your vision for Yale SSDP? Where do you see your chapter in a year? in 4 or 5 years? In four or five years, I hope SSDP will be an established, recognized and respected organization on campus that will routinely be in consultation with other student organizations dedicated to racial justice, compassionate approaches to people who use drugs to cope with mental illness, and a host of other causes related to drug policy. My goal is to form a broad coalition of groups such that we can channel our collective efforts and energies to achieve more than we could achieve alone, whether it’s reforming a racially discriminatory police department, decriminalizing possession of drugs, diverting people from prison to treatment, or any other issue.