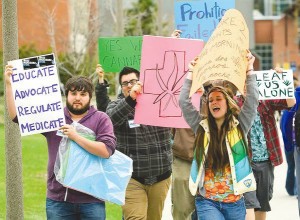 The University of Idaho is SSDP’s newest official chapter! I spoke with chapter founder and President Jami Reiner about her experience so far and her vision for the chapter moving forward; How did you hear about SSDP? I can’t really recall how i heard about SSDP. I had found out that we had a chapter at the University of Idaho started in 2008 by Eric Billings, a current member of our club (graduate student now) and it hadn’t been active since 2010. So I instantly put in some research and quickly decided that it was something i wanted to be a part of.

Why did you want to get involved/what made you decide to start a chapter? I decided to start a chapter because a local leader in Compassionate Idaho (Arlene Falcon) who was also my internship advisor wanted to reach the student body in Moscow in getting support for the Idaho Medical Choice Act (Petition to get Medical Marijuana on the ballot).  I decided that starting some sort of student club would give us an advantage. After finding out more about SSDP and the different campaigns and issues they are behind i became even more interested and motivated to help change the conservative drug policies on our campus.   What has the reception on campus been like so far? The reception on campus has been about 95% positive! I was a little suprised and thrilled that so many students as well as faculty members and community population were so supportive of what the club was and what we are trying to do on campus!   What are some of the things you have planned or want to plan for the fall 2012 semester? For the fall 2012 semester (as well as this summer), our chapter plans on working specifically toward 911 Good Samaritan Policies and Harm Reduction services. We have already talked to the Counseling and Testing Center as well as Student health and ASUI (the student body senate) and they have seemed completely on board to help us out! We have talked to students, parents and community members about our plan at campus activities such as Vandal Friday and Hempfest (a community event) and the response has always been 100% supportive.   What is the most challenging part of your experience starting/running the chapter so far? We haven’t run into a LOT of problems so far, actually it’s kind of silly and miniscule but the biggest problem we have is getting people to show up to our meetings. We’ve been shown a lot of support and have a very largeFacebook group and roster, but finding a time that fits for everyone and getting people to come to our meetings has been our biggest challenge.   What is the most rewarding part? The biggest reward for me personally is feeling like i’m making a positive difference in studentss lives her at the University of Idaho. I genuinely care about studentss health just as much as their rights and feel that they have a right to know their rights, and that the university should be helping to protect them rather then kicking them out for stupid petty offenses.   What are you most excited about for your chapter right now? The thing i am most excited about is actually getting stuff accomplished – getting a foundation of success to build our chapter on. I think after we do that, people will really take us seriously around Moscow. My main concern is that i do not want to be known as the “weed club” or the “drug club”  I want to be known as a club that seriously helps students.   What is your vision for University of Idaho SSDP? Where do you see your chapter in a year? in 4 or 5 years? My vision for UIdaho SSDP is a group of students and administrators and faculty working together to have open and honest talks about drugs instead of hiding it in the shadows. I want students to feel safe and secure when they partake in whatever they decide to do, as long as it’s not harming anybody else. In a year i still want to be working towards things such as alcohol/marijuana penalty equalization in student housing and working with the Counseling and Testing Center in Harm Reduction Services. I also want our club to be working withCompassionate Idaho in their medical marijuana legalization efforts.   Here are some articles we the chapter has already had in the local and school papers: http://dnews.com/local/image_5abd5509-8619-5edf-ad3b-a792794c89a0.html http://www.uiargonaut.com/2012/04/19/drug-war-delusions-made-clearer/ http://www.uiargonaut.com/2012/03/22/students-unite-for-sensible-drug-policies/   To get involved in this chapter, join their Facebook group or email Jami.