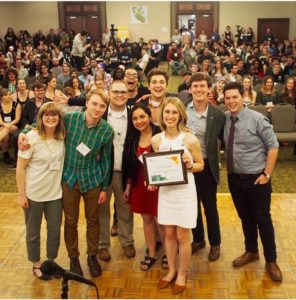 This past weekend, I attended the 2016 Students for Sensible Drug Policy International Conference in Washington DC. My closest family and friends know how passionate I am about the need for sensible drug policies in the United States and around the world, and this weekend invigorated me for what the future holds in drug policy reform. One of the ideas from this weekend that made me think back to the War on Drugs is how it isn’t a complete failure. The War on Drugs is succeeding in exactly what it was designed to do, to suppress certain people of color and people of low socioeconomic status. Never had I thought about how successful this War on Drugs has been until someone uttered those words. Sure we might all think the War on Drugs has been a complete failure due to the amount of incarcerated people for first-time nonviolent drug offenses, but this whole idea is suppressing innocent lives. I highly recommend reading the book “The New Jim Crow: Mass Incarceration in the Age of Colorblindness” by Michelle Alexander. She digs into the roots of the War on Drugs and illustrates how devastating this War on Drugs has been. While we have a long way to go, there is plenty to be hopeful for in the future for drug policies. I had the pleasure to talk and meet with the executive director for the Marijuana Policy Project, Rob Kampia, who is leading the initiatives in the United States to get marijuana legalized recreationally and medicinally. By 2018, he predicts with good intentions, that there will be 16 states that have legalized recreational marijuana. If that happens, the tide has fully turned. There are cities around the country, like Baltimore, that are thinking about decriminalization of ALL drugs and having safe-injection sites so that users have a safe and secure place to inject without repercussions. With the power of students and young people, there is no way this can be stopped. I know that I ramble on and on about drug policy to my family, friends, and colleagues, but this is something that is intertwined into our daily lives more often than we know it. After this past weekend, it became clearly evident for me that we need to stop treating drug consumers as criminals, and start treating it as a public health issue like sexual health. This generation is going to be the reason why we have the chance to end the War on Drugs, and it HAS to stop. Too many innocent lives are being ruined for consuming what they choose to consume. If people started to eat a pound of salt everyday and there were negative effects from it, would we outlaw salt? No, we would educate the public to not eat that much salt everyday. No one should be controlling people for what they want to put into their bodies. Let the individual decide what they want to do by giving them the proper education they need about drugs (that is scientifically based), rather than the harsh propaganda that has been pushed on us since the 1980s. This conference helped me realize that I’m not alone in speaking out against the War on Drugs, especially in the preposterous state of Tennessee. I commend all of my friends and colleagues for keeping up the fight. We have a long way to go, but the tide is slowly turning. I’ll leave everyone with a quote from Malcolm Gladwell that I believe captures my thoughts on the potential for the drug war to end in the future: “The tipping point is that magic moment when an idea, trend, or social behavior crosses a threshold, tips, and spreads like wildfire.” Sven out.