Earlier today, Governor Martin O’Malley appointed eleven members to the newly established Medical Marijuana Commission created under provisions of House Bill 1101. Joining this roster of medical and law enforcement professionals is SSDP’s Board of Directors member Eric Sterling. Sterling first joined SSDP as a funder and advisor in 1999, and became a member of the board in 2004. He has spent more than three decades advocating for medical marijuana policies as a lawyer, and co-founded the Criminal Justice Policy Foundation in 1989 to educate the public about failed global drug policy. 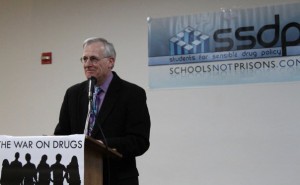 The commission is tasked with requesting and evaluating proposals for investigational medical marijuana programs submitted by teaching hospitals that already perform research studies approved by U.S. Health and Human Services. Applicants are required to source marijuana from commission-licensed Maryland growers or the federal government. Successful applications must also specify which medical conditions will be treated, and establish a detailed plan to analyze results while also evaluating for addiction. The Maryland medical marijuana program was structured by the legislature as a research program. Because research projects involving human beings in the United States require approval by institutional review boards to oversee the research to protect against practices that might manipulate the research subjects, the academic center’s medical marijuana programs will have to develop research protocols that meet their IRB’s approval. HB 1101 additionally stipulates that only five programs may run at one time.