Cork Institute of Technology SSDP recently conducted a 732 participant survey that asked students on campus their opinions on alternative drug policies. Chapter leaders Martin Condon and Daniel Ciemiega present some of the findings of their survey.  The introduction of “Medically Supervised injection centers” (MSICs) for heroin and other intravenous drug users is on the cards for Ireland in 2016. This means the individual use of heroin will be decriminalised, however, the sale of heroin will remain illegal. At least one MSIC will be opened in Dublin City Center which will enable thousands of heroin users to use in a safe and controlled environment. This will also reduce some of the problems away from the streets (eg. public injecting, drug litter, etc.) Rather than treating these people with the Gardaí, nurses and social care workers would treat these people as patients and be in assistance to provide emergency intervention in the event of an overdose. However, they will not be able to assist in administering the drugs themselves. As Irish Students for Sensible Drug Policy members, we believe that the introduction of an MSIC is a step in the right direction but significantly more has to be done to reinvent the conversation around drugs. Illegal drugs now constitute the second biggest global industry and is not something that is just going to disappear through force of the law; drug use is fundamentally embedded in human behaviour and because of the ‘invisible’ nature of it, our understanding of it remains elusive. In a survey we carried out in November 2015, in which 732 students participated, we asked if they believed heroin should be provided at the centers in order to reduce risks (eg. contamination, etc.) and also reduce drug related crimes (eg. having to steal to pay for drugs). 67% of people agreed that heroin should be provided to registered users of the MSIC’s in order to reduce drug-related crime. We also asked if drug testing kits/services should be provided at nightclubs and festivals; 75% answered Yes. Currently, our drug laws (1977) prevent such services from being provided as to be in possession of the drug to test it is currently illegal. In total, 61% of respondents admitted to using an illegal drug. Of the remaining 39%, we asked if they would be more likely to try a drug for the first time if they were decriminalised. Significantly, 92% answered “No” which suggests that there is additional scope for increased debate around the decriminalisation of drugs in Ireland and that greater efforts should be made to make this a politically favorable issue. Here are some pie charts demonstrating our findings: 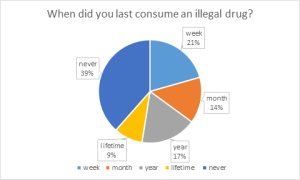 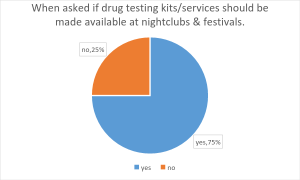 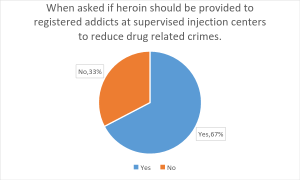 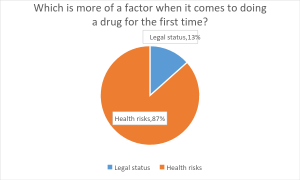 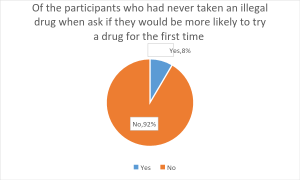