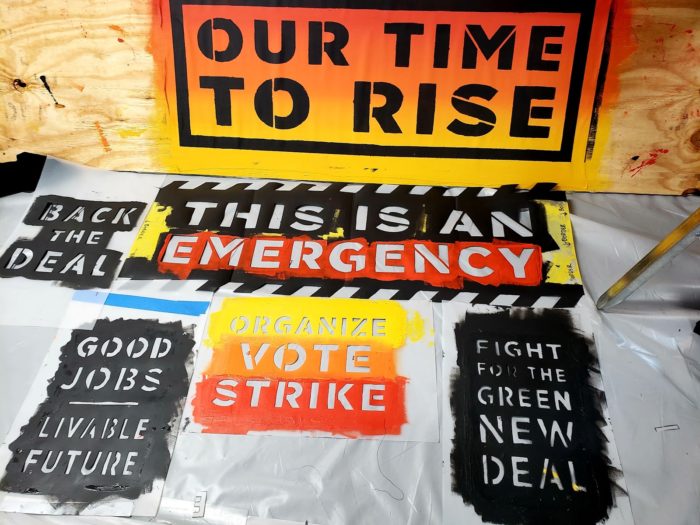 Following the 2016 election, the complete dissonance between elected officials and the electorate was palpable and signaled the dire need for large-scale organizing. It was in this moment that Sunrise Movement was born. Sunrise is a decentralized youth-led movement demanding climate action in the form of the Green New Deal. In 2017, the founders of Sunrise Movement dropped everything to study social movement theory and the history of social movements. All of this culminated into Sunrise Movement’s strategy: utilizing direct action to organize as many young people as possible to register as many voters as possible, then turn out the vote and stage mass non-cooperation events including sit-ins and regular climate strikes. More concisely: Organize, vote, strike.

Sunrise’s mission is simple: implement the Green New Deal so that young people will have a livable future and environmental justice can be attained by our most vulnerable populations. Regular climate strikes act as powerful community building events that nonviolently escalate the conversation. The urgency is real, and presenting a dire problem (climate emergency) beside a comprehensive solution (the Green New Deal) in a unity-focused tone (Sunrise) ensures that every individual can become engaged, if only we find what resonates.

The Green New Deal addresses the climate crisis with the kind of transformative change necessary to save our planet from catastrophe. The legislation includes principles of environmental justice and community reinvestment, extending protection and service to communities most directly and immediately impacted by the climate crisis. In many cases, these are impoverished communities and communities of color – those least responsible for the crisis we face. Both domestically and internationally, there are overlapping injustices of drug war criminalization and climate crisis, and there is even data suggesting that the full-scale militarization of the War on Drugs is directly contributing to carbon emissions, deforestation, and toxic pesticide use, especially in South America.

A beginning to end to the War on Drugs falls within the Green New Deal because we cannot move forward as a nation without dismantling that system of institutionalized racism.  We have the opportunity to change the world by recognizing drug policy reform’s place in the broader political scenery. We have presidential candidates who are running on platforms that address many major components of the War on Drugs, including: cannabis legalization (everyone except Joe Biden), ending mass incarceration (including ending cash bail and retroactive application of new cannabis laws), de-felonization of drug possession, medicalization of the opioid crisis, decriminalization of medication assisted prescriptions such as methadone, and legalization of overdose prevention sites. We even have candidates who have gone as far as suggesting that all drugs should be decriminalized (Pete Buttegieg and Tulsi Gabbard)!

The same candidates who champion the Green New Deal also advocate for the tenets of an end of the War on Drugs and economic liberation via abolishment of student loan debt, passage of Medicare for All, and federal living wage legislation. The drug policy reform, harm reduction, and psychedelic renaissance movements must recognize our obligation to build power with a movement which seeks to fundamentally disarm corporate entities that maintain their dominance by way of economic force.

2020 is the 100th anniversary of both women’s suffrage and mass non-cooperation, first led by Gandhi in 1920 against British occupation of India. Synchronously, 2020 marks the 50th anniversary of both the signing of the Controlled Substances Act and Earth Day, inviting a powerful opportunity for direct co-creation of the April 22, 2020 strikes.

Young people have been the largest voting generation since 2016, and in 2018 we outpaced Boomers in voting participation for the first time ever – and that was in a midterm election year when participation rates are historically even lower than those of general election years. 2020 will be decided by voter turnout, so student and youth organizers’ most pressing task is finding the messaging that resonates with those we are trying to persuade and connecting those who can already hear us to the drug policy reform and climate action coalition network.

Revolutions are completed when intersecting movements intentional align toward a shared goal, so the most important thing we can do right now is find each other. Then, we organize. If you are a student, find your local SSDP chapter. Non-students are also invited to join a campus-based SSDP chapter and connect via People for Sensible Drug Culture. Find your Sunrise hub, and join the movement as organizing begins for the holiday season strike.

By mobilizing young people to participate in what is, in many ways, the counterculture’s full circle, we are raising a generation who know that we can change the world. We are planting the seeds of the restorative justice movement that will follow our anti-prohibition and climate action revolution. By layering the climate action and drug policy reform movements, we can laser-focus our strategy and take back our future in 2020.