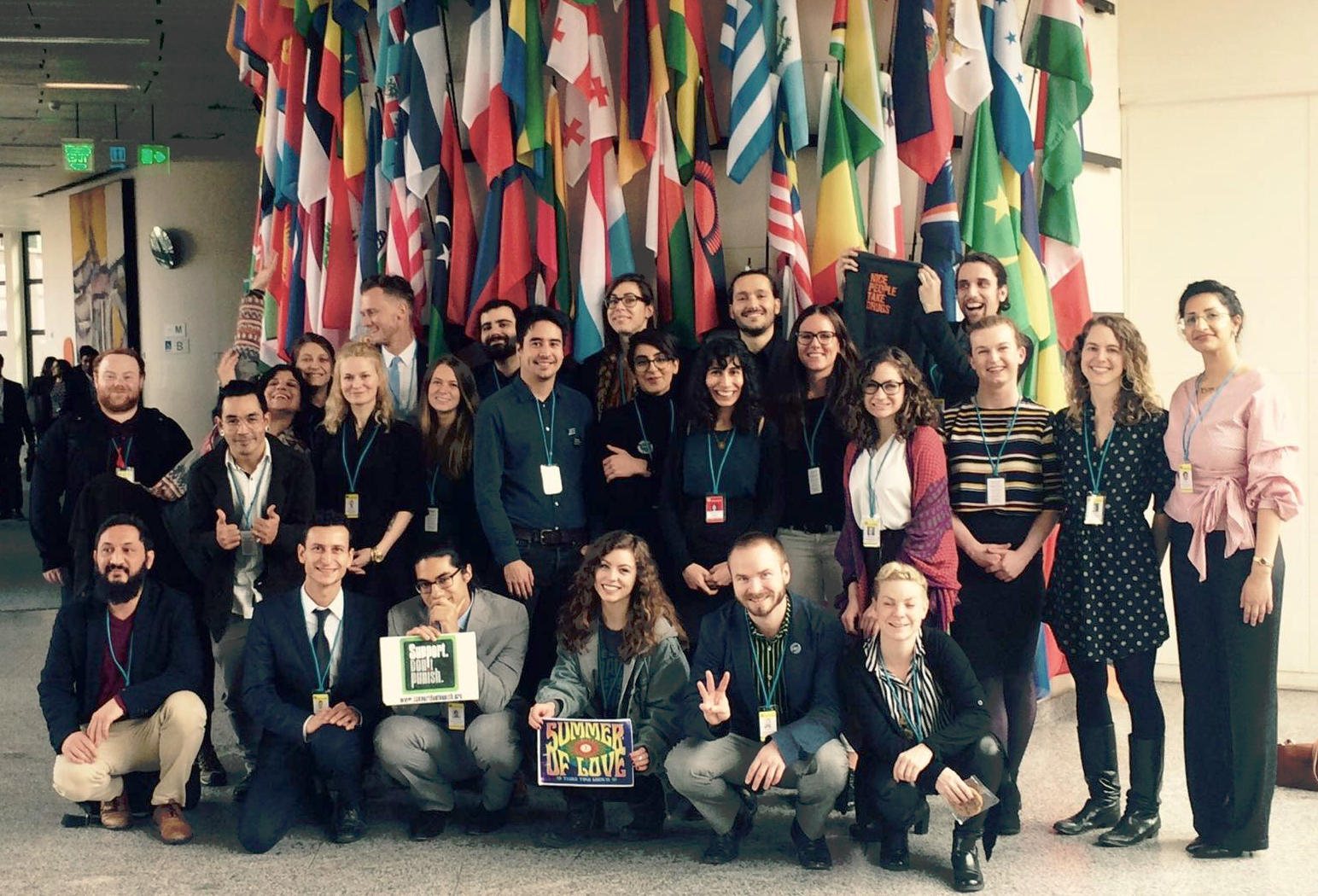 In June 2014, I joined the Students for Sensible Drug Policy staff after earning my B.A. in International Studies from Dickinson College, where I founded and led an SSDP chapter. Because of my knowledge and interest in global drug policy, I was immediately put in charge of managing our international chapter network, which at the time consisted of only a handful of chapters in Ireland, Mexico, and Nigeria. While excited, I quickly realized the complexity of the challenge I had been assigned. During this point in SSDP’s history there were legitimate questions about whether or not we could support an international network due to budget limitations and our overall lack of experience in global organizing. I still remember a debate at the 2014 Strategy Summit where some argued that SSDP should only exist as a US network, and thinking to myself that if I could just have a chance, everyone else would see the same potential for SSDP’s international chapters that I saw. Four years later, SSDP’s status as a global network is no longer in doubt and has become one of our greatest strengths. We now have chapters in over 30 countries and counting on every habitable continent. Take a look at any list of SSDP accomplishments and you’ll see plenty of actions that took place outside of the United States. We’ve taken action around regional issues such as the Ayotzinapa student massacre and extrajudicial killings in the Philippines, co-hosted a global convening of youth drug policy activists in Bangkok, and organized numerous workshops in West Africa along with four straight annual conferences in Ireland. We have seriously stepped up our game at the United Nations. During the 2015 and 2017 Reform conferences, we educated dozens of our members on international drug policy through our Model UNGASS simulation. We brought 10 members to the real UNGASS in 2016 and organized a rally at the UN the day before with over 150 people in attendance. At the most recent CND, we co-hosted a side event that had so many attendees we ran out of seats. We even had an SSDPer elected as treasurer to the Vienna NGO Committee, the body that oversees the relationship between civil society and member states at the UN. All of this is only a snapshot of SSDP’s accomplishments outside of the United States over the last few years. Through all of this success, there have also been a great deal of obstacles. Most international chapters operate without any support from academic institutions, often having to pay fees just to print out flyers for meetings or reserve a space on campus for an event. There are far fewer opportunities for fundraising due to economic hardship and the absence of the philanthropic culture found in the United States. Heavy stigmatization surrounding drug policy also means that many international members find themselves at personal risk just for being involved in SSDP. We have struggled to consistently bring international members to our annual conference due to the high cost of airfare and the difficult challenge of obtaining a US travel visa. Though SSDP has done what we can to mitigate these challenges, the reality is that engaging in our network as an international member is more difficult than engaging as a member in the United States. Taking these challenges into consideration, it’s absolutely remarkable what our international chapters have achieved over the last few years. One can’t help but imagine what they could accomplish if we were able to offer them the kind of support that would cover the resources they need most. To ensure that our international members are able to participate in SSDP at the same level as our students in the United States, SSDP is launching an International Activities Fund. This fund will help international chapters organize conferences and other events, conduct outreach to relevant stakeholders, and amplify the youth voice at the United Nations. If enough funds are raised, we can also provide additional scholarships for international students to attend SSDP2019 in Chicago next year. Our goal is to raise $10,000 for this fund throughout the month of July, and we’ll need your help to do so. During the next few weeks you’ll be hearing stories from some of SSDP’s most outstanding global activists. From Mexico City to Manila, these young people are leading the way for youth activism on drug policy in their countries. I ask that you read their stories, listen to the challenges they have encountered, and consider donating to the International Activities Fund today so we can continue supporting young people all over the world who have had enough of the War on Drugs.