The Need for Drug Policy Reform in Ghana and West Africa

The Need for Drug Policy Reform in Ghana and West Africa

By Isaiah Adegoke Jnr, a member of SSDP Ghana and a Fellow at the 3rd West Africa Executive Course on Human Rights and Drug Policy. The 3rd Executive Course on Human Rights and Drug Policy in West Africa, hosted from the 25th to 30th of July, 2016 at the University of Ghana, emphasized the need for a review of policies within the subregion of West Africa. This campaign to restore the rights of drug users was anchored by the Faculty of Law at University of Ghana through the support of Open Society Foundation (OSF) and Open Society Initiative for West Africa (OSIWA). 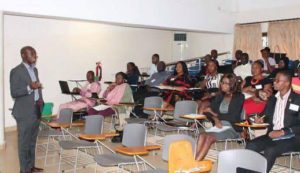 Students listen to a speaker at the 3rd Executive Course on Human Rights and Drug Policy in West Africa. The course was hosted by the Faculty of Law at the University of Ghana and was sponsored by Open Societies Foundations and the Open Societies Initiative for West Africa.

In an increasingly interconnected world, Ghana and the entire West African subregion has become an attractive destination for transnational organized crimes, one of which is drug trafficking. Drug cartels have always collaborated with local partners to turn the region and their individual nations into major transit routes for illicit drugs. The region has long produced cannabis mainly for local consumption, which is the most used drug. It is now quickly becoming a producer and exporter of synthetic drugs such as amphetamine-type stimulants. According to a report by the West Africa Commission on Drugs released in 2014, the drug trade in the subregion was valued at hundreds of millions of dollars. This backs up United Nations Secretary General Ban Ki-Moon’s claim during a UN Security Council debate in 2013 that the annual value of cocaine transiting through West Africa was $1.25 billion US dollars. This is significantly more than the annual budget of some countries in the region. While this may sound lucrative and attractive, it is disheartening to note that virtually all of the countries in the region, including Nigeria, are still among the poorest in the world. The growth in drug trafficking comes as the region is emerging from years of political conflict and prolonged violence. This instability has left a legacy of the fragile state of institutions and weak criminal justice systems that are vulnerable to infiltration and corruption by organized crime. While democracy has gained ground in the continent, the prevalence of this illicit trade appears to be an eminent threat to its sustenance. 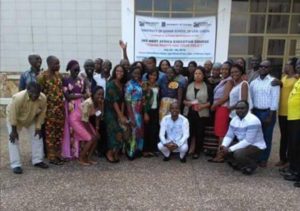 A group photo of all the students who attended the course.

The trade has also led to an increase in money laundering. Despite efforts in establishing effective anti-money laundering regimes, the needs of criminal organizations still outweigh the capacity, resources and political will of governments to oppose them in some instances. There is an urgent need for formidable policies at national and regional levels to contain this menace. Therefore, nations of the region should move away from traditional law enforcement tactics like burning seizures of illicit drugs as well as the arrest and torture of drug users. Instead, they should focus more on preventative measures such as drug demand reduction. The tendency to focus on numbers of seizures and arrests masks the failure to counter drug-related activities of individuals in positions of public trust who do more harm to the society. As a result, it is mostly the small dealers, users, or couriers that are arrested, not the leaders of criminal organizations. It is also commonplace to see drug addicts being arrested by law enforcement agents with little or no counseling for them to heal from addiction. It can be argued that some get involved in drug use due to pressure and a lack of knowledge about the risks of drugs. Cases of those who came out of counseling and stopped using drugs show that a policy direction in this regard can save more lives. This is why the World Health Organization (WHO) regards drug addiction as a disease that should be treated as a public health issue. The arrest and imprisonment of addicts will increase the burden of prison congestion on the government rather than solve the problem. Criminalization of drug use and possession places significant pressure on the already overburdened criminal justice system. More worrisome is the fact that it can cause major disease epidemics such as HIV/AIDS and hepatitis C, especially among those who inject drugs with shared syringes. 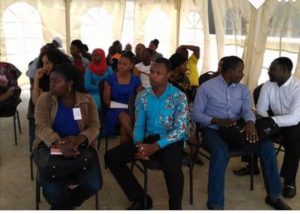 Countries like Tanzania have adopted harm reduction methods such as providing syringes for drug users for reducing the spread of infections and deaths. In the light of these more effective policies, the current practice of criminalizing every aspect of the drug trade should be discouraged. Through regional partnerships such as ECOWAS and the African Union, which constitute solid intergovernmental platforms, authorities can respond to drug trafficking and use effectively. With the external bilateral and multilateral partners as well as the support of the United Nations, benefiting nations cannot afford to fail in drug policy review in the subregion. Leaders in the area should take advantage of global advocacy to decriminalize drug policies. However, given the multifaceted nature of the drug problem, future progress will require enhanced cooperation between governments, specialized services, and civil society in the producing, transit, and consumer countries.