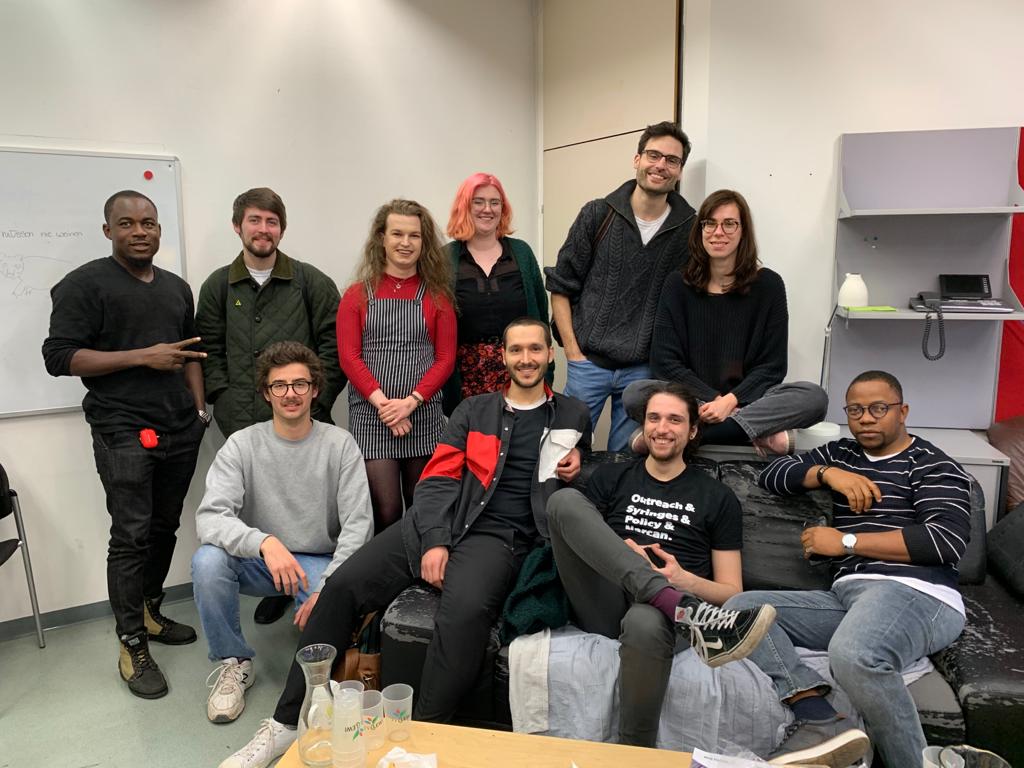 These blog posts are made in collaboration between CSSDP, SSDP and Youth RISE as part of our joint effort to provide youth with information about the Commission of Narcotic Drugs. We are the Paradigma Coalition.

It’s day 3 of the 63rd session of the Commission on Narcotic Drugs. Today was the day for cannabis to be rescheduled – although admittedly everyone was aware that it wouldn’t happen. By Friday rumours had already poured in that the cannabis scheduling was going to be delayed – but today was the day for the explanation and it basically revolves around whether member states themselves were sufficiently informed and capable of making a decision. In response, we look at everything else that is not cannabis-related.

The morning had two major side events. The first side event focused on “Social Justice and Peace Building Within Drug Policy Reform.” The side event was collaborative, where we discussed what harms were caused by prohibition and understanding models of regulation. Steve Rolles from Transform Drug Policy Foundation, noted that the options for drug regulation already exist, including by prescription (methadone), specialized pharmacists, licensed retail, licensed premises, licensed premises and unlicensed sales. 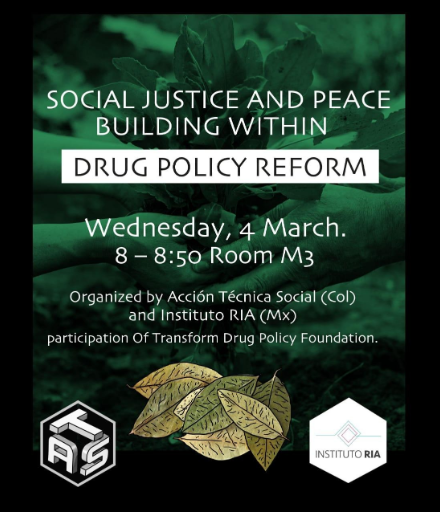 The panel ended on a challenging note, challenging for Canadians and while it had to do with cannabis, what it really had to do with was exploitation. For Canadians unaware, in the Global South Canadian resource extraction is fairly notorious for its exploitative nature, and human rights abuses. We talk far less about canna-colonialism, namely that Canadian cannabis companies are forcing their way into other countries medical cannabis industries across the world. While people were kind enough not to mention Canada by name, the international stage allows us to see ourselves in relation to a global system of prohibition. One, which we should not ignore.

In the Press Room afterwards, was a panel co-sponsored by the Canadian delegation, titled, “Working towards equitable access to treatment of problematic substance use for Indigenous peoples”. In this panel, which included 3 Indigenous women and a member of the New Zealand delegation, the panel focused on the importance of culturally specific programs, the importance of land and community connection as well as funding Indigenous programs on their terms, rather than contingent on biomedical scientific models. The three Indigenous panelists, who discussed programs situated in the colonial states of New Zealand, the United States and Canada, each discussed their relationships both to the settler-colonial state and how their programs had had important impacts on the people in their communities. The entire discussion has been written up by the people at the CND Blog, and is worth checking out in full.

In more non-cannabis news, member states were allowed to respond to the fact that the vote for cannabis rescheduling would not occur. Some members (such as the EU and Mexico) took the time to point out that they were in fact ready to vote, but respected that others might not be ready. Others talked about how they appreciated the World Health Organization, but did not agree that there was sufficient evidence. Then there was a third group who also started talking about the importance of scheduling 2 other drugs: tramadol and kratom. Tramadol (a semi-synthetic opioid – as heroin and morphine are) has been related to what some refer to as West Africa’s opioid crisis, but as it is a cheap medication and crucial for regions that do not have access to other opioids, the UN has been hesitant to schedule it.

For the Youth – But which Youth?

The Youth Forum presented the work that they completed today. For those unaware, the Youth Forum, is an annual youth meeting that runs adjacent to CND. Youth from the Forum, do not attend CND itself, other than giving a statement to the floor of the UN. Most of the members do not, however, know that CND is occurring and member states get to pick who attends – thereby limiting who counts as the “right” youth to talk about youth drug related issues. Every so often, we’re able to have a drug policy reformer attend the Youth Forum, such as Heather D’Alessio, a previous board member and our Chapter Liaison, who attended last year. Although that was only possible due to a willingness by the Canadian Delegation (Heather just decided to join them as they sat on the Delegation already).

In response to the lack of transparency in the selection process for the Youth Forum and L5 (covered in our first blog post) the Paradigma Coalition released a statement responding to L5 and publicly released it in anticipation of the Youth Forum’s statement: 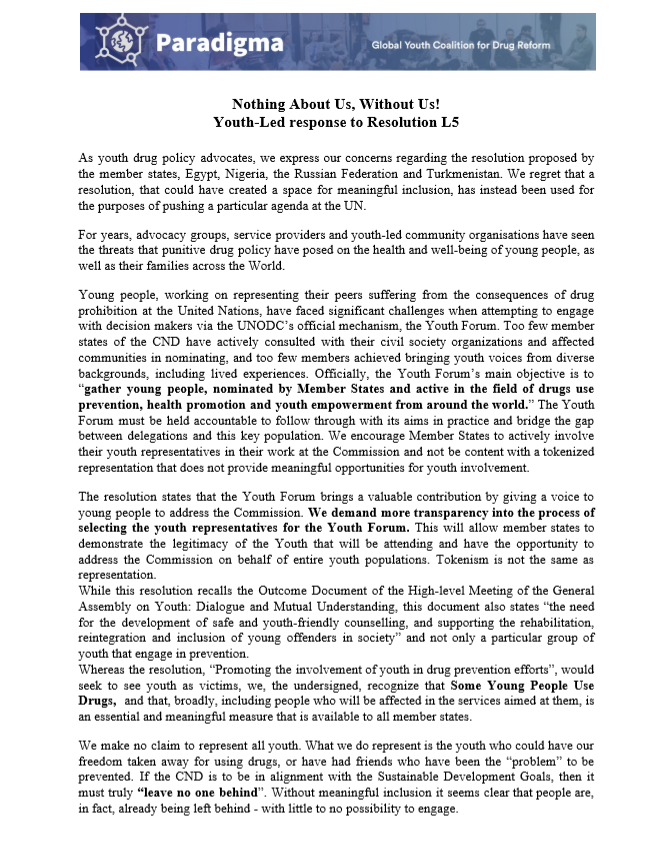