In the fall of 1996, members of the Student Drug Reform Movement (SDRM) began to chat over the internet using a Drug Reform Coordination Network (DRCNet) discussion page. In 1997, the Rochester Cannabis Coalition (RCC) at the Rochester Institute of Technology applied to become the first official student organization dedicated to fighting back against the War on Drugs. RIT denied RCC’s application and ultimately expelled the lead organizer, Shea Gunther ’98, who would go on to become an SSDP founder. 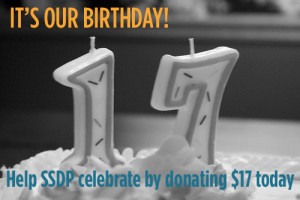 ​On October 1, 1998, RIT students held an organizing meeting and decided to identify themselves as being for something positive, and Students for Sensible Drug Policy was officially named.  Read more about the history of SSDP and listen to a podcast about our history here.​ Today marks 17 years of work building and developing the student movement to replace the nonsensical drug war with sensible policies that protect students and our communities — and we’ve never been more capable of dismantling those policies with the support of people like you. Our staff is the largest it’s ever been with our full-time team of nine, presence on nearly 300 campuses across the globe, and more than 4,000 active students and thousands more alumni and supporters. Help celebrate our 17th “birthday” with a one-time or monthly donation of $17 so we can continue to honor the work of our founders and advocate for a more sensible approach to drug policy!