HomeBlog Today’s the day the DARE generation could take over

Today’s the day the DARE generation could take over

Today’s the day the DARE generation could take over 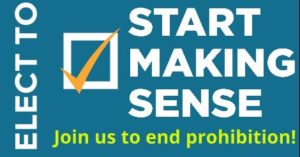 Category: Blog | November 8, 2016 By Betty Aldworth No comments yet

Nothing is inevitable, but it’s undeniable: the DARE generation is done with marijuana prohibition, and it’s time for us to usher in a new approach to drug policy. This is our chance! 2016 marks the first election when Millenials and Gen Xers make up the largest share of the electorate. That would be pretty cool, but it doesn’t mean we’re going to win on the issues important to reformers. We still don’t vote at anything close to the rates of older voters and they don’t support sensible reforms at anything close to the rates that we do. So pick up the phone. Spend as much time as you can today driving young voters to the polls through our phonebank. And if you can’t make a call, consider making a gift of $5, $10, or $20 to help us thank callers with a t-shirt. We have more power than we imagine, and it’s about effing time we use it.

In the most critical election yet for the drug policy reform movement, Students for Sensible Drug Policy has reached out to tens of thousands of young voters to make sure they make their voice heard on election day. But our opponents are working hard, too, to derail our efforts to bring sensible marijuana reforms to states across the nation. That’s why we aren’t letting up. We’ve been calling young people through our phonebank, educating voters about the harms of marijuana prohibition and making sure they have a plan to vote on election day!
Our phonebank system allows supporters of sensible drug policy —whether or not you’re a student! — to call voters in Maine, Arizona, Massachusetts, Nevada, Florida, or California to ensure they know there’s a cannabis initiative on their ballot and how they can vote. You can help end marijuana prohibition just by making phone calls between 9am Eastern and 9pm Pacific. Voters under 35 are incredibly likely to support ending marijuana prohibition, but are also the least likely group to vote. We can improve turnout simply by telling them that a reform initiative is on the ballot! In Florida in 2014, youth voter turnout nearly doubled thanks to the medical marijuana initiative!
And there are prizes! We love contests! Of course there are prizes. See you on the leaderboard,