On Wednesday, March 11, 2015, the Undergraduate Student Government of the University of Connecticut voted with a clear majority to pass a statement of position in support of legalizing marijuana, and endorsing Connecticut House Bill 6703 and House Bill 6473, which would do just that. 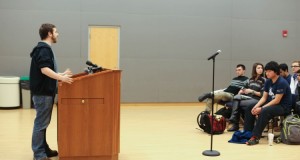 The USG legislation, written by UConn chapter President Tyler Williams and sponsored by Undergraduate Senators Domenica Ghanem and Bennett Cognato, states that ending marijuana prohibition is in the best interests of the University community. The legislation addresses the Aid Elimination Provision of the Higher Education Act which prevents a student from receiving federal aid, such as Pell Grants, Stafford Loans, and other forms of aid if they are convicted of a drug crime, growing public support for ending marijuana prohibition (particularly in college-aged groups), revenue generation as a source of funding for higher education in the state, and better police prioritization as reasons to legalize and regulate marijuana in Connecticut.

Over the past five weeks, UConn SSDP has met with student representatives, tabled on campus, collected hundreds of petition signatures, generated campus media coverage for the legislation, and brought a record number of public comments to support the effort at the Student Senate. This campaign comes at a time during which Connecticut-based Quinnipiac University found a 63% majority of Connecticut citizens support legalizing marijuana, up ten percentage points from a similar study published in 2014.

During debate, student representatives who agreed with the legislation cited reasons such as the overwhelming constituent support on campus, the institutional racism of marijuana prohibition which targets minorities in the state and on campus, the job creating potential of a legal marijuana market, and above all, the need for individual freedom.

The passing of this legislation represents the official voice of the undergraduate students of the University of Connecticut. UConn SSDP thanks the student government for its time and support, and plans to utilize this statement in ongoing efforts to end marijuana prohibition at the state level.