Updates from Day Three of the 62nd Commission on Narcotic Drugs

Updates from Day Three of the 62nd Commission on Narcotic Drugs 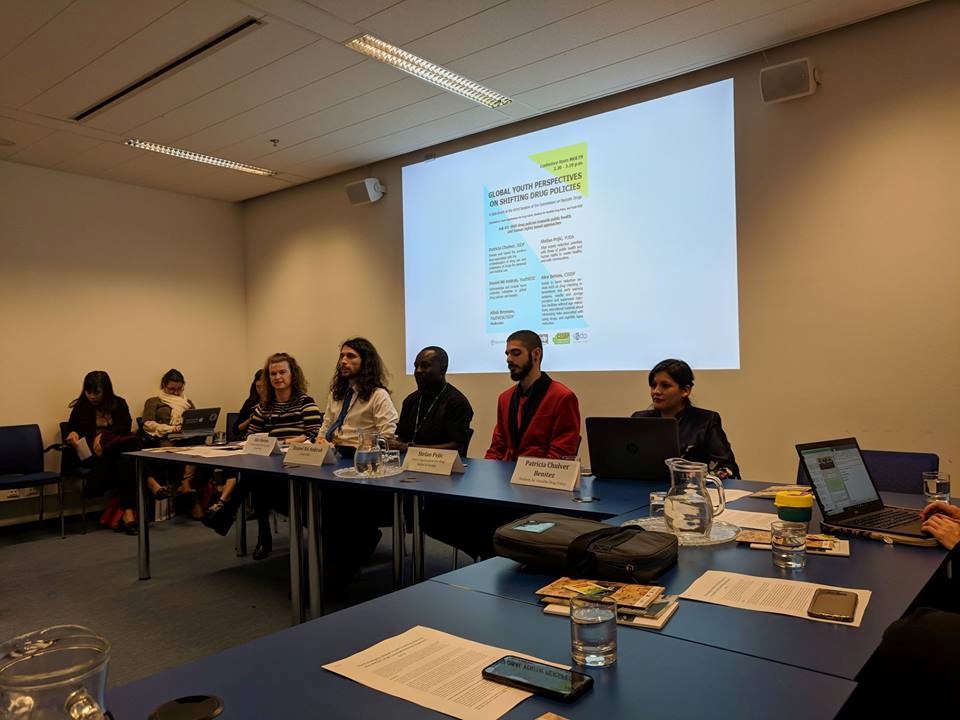 SSDP staff and members are in Vienna this week with our youth allies in CSSDP, SSDP Australia, Youth Rise, and YODA attending the 62nd Commission on Narcotic Drugs meeting (“CND”). Yesterday, we shared an update from the second day of CND courtesy of Ailish Brennan of Youth Rise/University College Dublin SSDP. Today, Orsi Feher ’16, SSDP’s European Global Fellow and Treasurer of the Vienna NGO Committee on Drugs, shares her thoughts on the third day of the meeting. For more details about everything that is discussed this week, check out the CND Blog.

A new day dawned at the UN in Vienna with a new addition from the SSDP family to the board of the Vienna NGO Committee on Drugs (VNGOC). Founder of SSDP Australia and current chair of the board, Penny Hill, has been elected to serve as Deputy Secretary joining SSDP International’s Europe Global Fellow, Orsi Fehér ’16, in our efforts to increase the visibility of youth in the global drug policy discussion.

While some of us were in informal dialogues in the morning, the plenary session proceeded to discuss the agenda item on the Implementation of the Political Declaration and Plan of Action of 2009 and the follow up to UNGASS 2016. The debate didn’t really see anything new or exciting emerge until our very own Marisa Morales ‘15, SSDP’s Latin America Global Fellow, took the floor for her fiery intervention. Marisa set the scene by acknowledging the unique situation young people face when it comes to drug-related issues and went on to explain that the harm caused by drug prohibition is worse than the harm caused by drugs themselves. She talked about how harm reduction measures should be embraced by Member States so access to evidence-based education and health services without fear of punishment can create a culture of safety around drug use. She then brought into context how such a culture is necessary for member states and UN agencies to successfully implement the ideas discussed in the UNGASS outcome document. She introduced the three asks of the Paradigma coalition and ended her statement by inviting everyone to our youth side event to get more familiar with the work of Paradigma members and its relevancy to global drug policy processes.

The informal dialogue was organized by the VNGOC to give an opportunity for NGOs to engage with the UNODC and the INCB and to their credit, besides the prepared Q&A, they made time to respond to spontaneous questions. The first session with Mr. Fedotov, Executive Director of UNODC, was about as low energy as one would expect a discussion with a 71-year-old Russian diplomat about drugs. He boasted the Listen First project that is aimed at the “most precious asset” of humanity, children, and youth, and which some of our SSDPers were not welcome to contribute to. The only relevant moment to highlight is the question from our friends at ICEERS about indigenous peoples, especially women, who have been historically vulnerable to drug control policies. The answer of Mr. Fedotov lacked any compassion or actual content, to be honest, but he did command NGOs working on supporting these communities and stressed the importance of Bangkok and Nelson Mandela rules and how they work towards promoting these among member states.

The INCB dialogue was slightly more interesting, especially against the backdrop of the escalated discussion about the board’s role in international drug policy with member states chiming in sternly. Mr. Sumyai took us on a ride; the president has talked about the accusations of overstepping their treaty mandate and how they need to be careful respecting where the WHO comes in, yet went on to cast judgment on the mode of administration when it comes to Cannabis as to what qualifies as medical and what does not. Then he responded to a question about improving women’s access to treatment with a very patriarchal sentiment about women’s main task in life being the taking care of families. To our delight, he also served some info that will keep Paradigma busy this year: INCB announced their plans to continue to host civil society hearings in 2019 and their particular interest in youth organizations, especially on the grassroots level. We know through unofficial channels that they were very impressed with SSDP representative Elli Jenner from Austria at their last hearing which dealt with the issue of Cannabis and was the first event of its kind for decades.

After lunch, we made our way to our first side event this week titled Global Youth Perspectives on Shifting Drug Policies which featured Ailish Brennan ’18 from Youth RISE & University College Dublin SSDP as moderator, Patricia Chulver ’17 from SSDP Bolivia, Stefan Pejic from ReGeneration in Serbia, Daniel Nii Ankrah from YouthRise in Ghana, and Alex Betsos from CSSDP as speakers. The panelists talked about a wide range of issues that relate to the shifting of drug policies towards public health and human rights-based approaches; from the review of punitive laws and aligning supply reduction efforts with human rights to harm reduction and their personal experiences in working with affected populations. The room was so packed that at one point, Alex had to manage the crowd to avoid the harms of less-than-sufficient ventilation at the venue. Following the panel, the audience took the opportunity to ask questions and highlight their experiences relating to those on the panel resulting in a lively conversation that went well beyond the usual time limits of these events, signifying a highly successful side event – business as usual, huh?

In less interesting news, the discussion on inter-agency cooperation saw member states boasting their regional leadership and the EU playing good cop, pushing for the full implementation of the UNGASS outcome document and increased coordination among entities and consultations with NGOs. Turkey, Macedonia, Montenegro, Albania, Bosnia, Ukraine, Iceland, Moldova, Armenia, San Marino, and Georgia have also lined up behind this joint European statement.

After the commission and our youth delegation concluded our work for the day, we reunited at Vienna’s Sigmund Freud University where the local SSDP chapter organized an event on Psychedelic Healing. It was an emotional and surprisingly interactive session with Ismail L Ali ’15, policy advisor of MAPS and chair of SSDP’S board of directors, moderating a discussion with Keren Tzarfaty, Ph.D.,M.F.T., co-founder of the Hakomi Institute of Israel and MAPS Trainer, and Paula Graciela Kahn, MAPS’s migrant justice advocate.