The President of Uruguay has defended himself against accusations from the United Nations concerning his country’s recent passage of a bill to legalize marijuana. “Tell this old man not to lie,” José Mujica remarked1, in reponse to claims by Raymond Yans, head of the International Narcotics Control Board, that Mujica had refused to meet with a UN delegation to discuss the new policy. The Uruguayan Senate passed the final version of a cannabis regulation bill on Tuesday, December 10, 2013. President Mujica, a vocal supporter of the measure, is expected to sign it into law. Although drug policy liberalization has made major progress in many Latin American states, the population of Uruguay itself is not entirely supportive of the move. One recent poll suggested that 58% of the country’s population oppose the measure, although this is down from 68% in June. However, Mujica’s ruling party, the left-wing Broad Front, supports the measure and holds a majority of seats in both houses of the legislature. The United Nations agency has also complained that the move is a treaty violation. Specifically, it violates the 1961 Single Convention on Narcotic Drugs, which Uruguay has signed. The treaty requires all signatories to “limit exclusively to medical and scientific purposes the production, manufacture, export, import, distribution of, trade in, use and possession” of various listed substances and plants, including cannabis.2 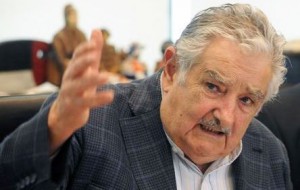 Yans further referred to the “dependence-producing potential” of marijuana and accused Uruguay of ignoring the “available scientific evidence” on marijuana’s health effects. The idea that prohibition of a popular product would actually reduce its health risks was apparently taken for granted. Evidence from the time of alcohol prohibition, when large numbers of people continued to drink unreliable black-market products, and an estimated 10,000 people died from tainted alcohol, does not seem to support this. Mujica defends the new law, explaining that it will allow Uruguay to combat criminal elements. Although Uruguay has a much lower homicide rate than many Latin American nations, public concern about crime has been increasing, and there is certainly some degree of organized crime in the country. The head of the country’s National Drug Board suggests that the illicit marijuana is smuggled into the country from the neighboring nation of Paraguay. The new system will seriously challenge the black market by creating a government monopoly on the sale of the drug through pharmacies. It will also allow registered users to grow limited amounts at home. Mujica also pointed out that the US states of Colorado and Washington recently passed similar measures. He suggested that if the UN criticizes Uruguay but not the US for similar laws, a double standard is on display. The new regulations will only apply to Uruguayan citizens, so the country will avoid the negative publicity which might otherwise stem from international “drug tourism” as has been seen in the Netherlands. Although still technically prohibiting the trade in the drug and thus not as clearly violating the relevant treaty, the Netherlands has long maintained a policy of official tolerance for the small-scale distribution of marijuana through registered so-called “coffee shops.” An estimated 1.5 million citizens of other nations travel to the Netherlands annually to visit its coffee shops, and account for a large percentage of the tourism in Amsterdam. The Dutch federal government has even attempted, ultimately without much success, to ban this “drug tourism.” A version of this article also appeared on The Libertarian at http://the-libertarian.co.uk.