The University of South Florida (USF) recently passed a Medical Amnesty/911 Good Samaritan Policy, which protects people from prosecution for simple possession of drugs or drug paraphernalia when calling for medical help during a drug-related emergency. The policy, enacted roughly one year after the state of Florida’s statewide 911 Good Samaritan Law took effect, was announced by Dean of Students Michael Freeman on November 14th, 2013, with a school-wide email. 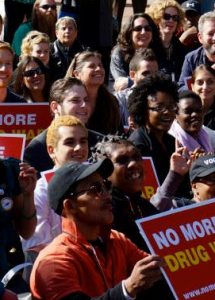 Evan Eisenberg at the DPA Victory Walk in Denver, Colorado

Florida is in the minority of states by having 911 Good Samaritan protections in the first place, a smart and progressive move for such a conservative state, but colleges and universities in Florida see a weakness in the state law: most dangerous drug-related situations on campus take place at parties where underage alcohol consumption is near impossible to stop and alcohol is the drug of choice. Because of this, SSDP chapters in Florida are working hard to make sure every college and university in the sunshine state has its own protections, in addition to the state law, in place for its students. Excessive alcohol consumption is responsible for 79,000 deaths annually, and measures like USF’s Good Samaritan Policy can and will help mitigate this risk.

The spirit of the law should mean underage possession of alcohol is covered, but the language technically only protects people from prosecution for possession of controlled substances and/or paraphernalia. An excerpt from the official USF Policy:

Any Student who qualifies for amnesty under this Policy will not be charged with violations of any of the University System Student Codes of Conduct as those Codes relate to consumption and/or use of alcohol and/or drugs. Under this Policy, Students who seek or receive emergency medical assistance for themselves or Students who seek assistance for another Student experiencing an emergency related to the consumption of alcohol and/or other drug use or misuse may qualify for amnesty. Although Students who qualify for amnesty may be exempt from the Student Conduct process, they may be required to  complete educational measures and pay for any incurred cost associated with those requirements.

How we did it

This campaign took more than two years from start to finish. As the driving force behind getting this started, I ensured the USF Medical Amnesty Policy did not get lost in the shuffle as new administrations came and went over the course of the campaign. One Wellness staff member participated in the initial meeting in early 2012 where I brought together key Student Affairs administrators. She stayed with it until the very end, armed with thorough research I had shared with her as we stayed in touch over the two year campaign. At that initial planning meeting in 2012, USF’s legal team asked me to draft a policy for the University, which was actually approved by USF’s lawyers before the new USF’s Student Affairs administrators came in. The new administrators understood the importance of a Medical Amnesty Policy for a college campus and moved forward with writing and passing the policy with my help, based on my initial draft and input from the Substance Education & Awareness Team at USF, of which I was the only student member. The University has a “range of sanctions for drug and alcohol possession,” meaning that protecting students who make mistakes regarding substance use is “no small thing.” My regional connections and the SSDP resources at my disposal is what made it possible for me to immediately position myself as the go-to source for information on Medical Amnesty Policies at USF. I capitalized on this position, and with my persistent pushing, I made sure that this policy became a reality.

Following the passage of the policy, The Tampa Bay Times published a front-page, above-the-fold article extensively quoting me and the USF chapter’s current president, Cassandra Akanu, followed up by an editorial column praising USF’s smart, progressive move to adopt such a policy and crediting SSDP for writing it. My work on the USF policy also led to an interview for an article in USA Today praising Medical Amnesty Policies for saving lives, crediting SSDP with passing policies on campuses around the country. As I told them with regards to these policies, “We’re going to keep checking off one campus after another instituting this policy.” As more administrators see the success of these policies, they can communicate with colleagues at peer institutions about their effectiveness.   “[Students] should be able to make that call without hesitating out of fear that they could get into trouble themselves.” “USF recently made a move that isn’t just sensible for students – it’s downright progressive. This fall, USF enacted what’s called a Medical Amnesty Policy, drafted by the head of a group called Students for Sensible Drug Policy,” according to Tampa Bay Times columnist Sue Carlton. As Carlton points out in her column, “The idea that a student might move quickly to get help because it has permeated his young brain that the rules say he can make the call and not get in hot water – well, it’s seriously hard to argue with that….It would not be too dramatic to say this policy isn’t just about saving future prospects, but actual lives. And that’s not just a no-brainer – it’s downright college-smart.” Predictions that there would be some anti-drug zealots bemoaning this “softened” drug policy have proven to be largely false, but this is such a common-sense harm reduction policy to save lives that there really is no excuse for not implementing one and press has been extremely positive with SSDP serving as the focus of numerous articles on Medical Amnesty Policies. Two students have already received medical amnesty at USF, clearly highlighting the life-saving harm reduction work done by SSDP chapters.   ——— 911 Good Samaritan Policy Resources: