As a chapter, we generated a list of bills related to drug policy using Virginia’s online legislative information system and then made a list of our various representatives and their committees, and finally prepared our positions on several bills in both the House and Senate and met with the legislators. (There are always drug policy related bills in state legislatures, we chose from dozens!) The first bill we lobbied in favor of was a bill that would prevent potential recipients of TANF from being automatically denied due to a felony drug offense, opposing only the portion of the bill that listed drug testing as a requirement. 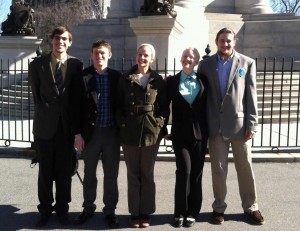 Next, we opposed a bill that created “structural classes” of synthetic cannabinoids, such that substances within these classes would be prohibited without the precise chemical being listed in the law. We felt that this law was far too broad and overreaching, potentially prohibiting useful cannabinoids that have yet to be discovered nevertheless their discovery in the first place. Finally, we distributed information about medical amnesty policies and our specific campaign, reconnecting with legislators we have worked with in the past. Overall, the response from legislators and their aides was very positive. While complete agreement didn’t always happen, our points were understood and everyone was impressed that we were so well spoken and thankful that we took the time to speak with them. Indeed, a successful SSDP lobby day in Richmond!   The Result: We built a good rapport with our legislators and established ourselves as professional and motivated citizens concerned about our state. Our legislators are thinking about drug policy and now they know how we (their constituents) feel about the issue. Our chapter members have that much more lobbying experience under their belts and we are that much more prepared for our next visit.     Want to lobby your state representatives? Talk to your Outreach Director and we can help you coordinate it! If you’re not already part of a chapter, find a chapter or start one at your school!