HomeBlog We have no sense of the impossible

We have no sense of the impossible

We have no sense of the impossible

We just got big news, and wanted to share it with you right away: a long-time friend of SSDP would like to make a generous gift of $25,000 on December 31, but she doesn’t want to do it alone! So she has challenged you to join her by making a gift of $5, $10, $25, or more today and, when you do, it will be matched dollar-for-dollar up to $25,000. We know it seems like a stretch to have gifts of $5, $10, or $25 add up to $25,000 in just 8 days. But in 17 years, we’ve taken on countless challenges far tougher than this and surprised even ourselves with the scale and scope of our success. Perhaps that’s the best thing about SSDPers: we have no sense of the impossible! We believe we can change the world if we’re smart and strategic, and we don’t let obstacles like “it’s never been done before” hold us back. 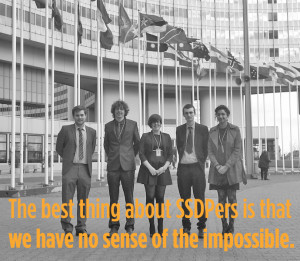 Irish SSDP members at the United Nations in Vienna, Austria.

That trait is embodied around the world, where our global presence grew from 4 to 12 countries this year, and our capacity to influence international drug policy has also grown thanks to supporters like you. The grassroots nature of SSDP is being replicated in other countries through knowledge sharing among students and direct training from our outreach staff. Our presence in Ireland, for example, started with a single activist in 2012, Graham de Barra, who has since gone on to found a prominent home-grown policy reform organization called Help Not Harm. He still acts as a mentor to the Irish SSDP chapters, which have exploded into a full-fledged national youth movement. Responding to growing youth resistance to harmful and punitive drug policies amid a national heroin crisis and shifting attitudes about cannabis, SSDP was a natural fit for forward-thinking Irish students, and the network snowballed into five chapters and hundreds of young activists in under four years. Ireland even boasts SSDP’s largest chapter, at National University of Ireland, Galway, which has 250 active members. With a focus on promoting harm reduction and erasing the stigma of drug use, Irish SSDP chapters quickly outgrew pushing campus reforms to influencing national policy and having honest conversations about drug use in mainstream media. In fall 2015, those efforts brought Graham and Dublin City University chapter leader Dan Kirby to Ireland’s national legislature to offer policy recommendations before the justice committee. The debate over how best to handle drug policy was a contentious one, and Graham’s and Dan’s testimony on the benefits of harm reduction offered a bold solution: follow Portugal’s successful model of decriminalizing the possession of small amounts of all drugs. Days later, the committee successfully urged the national government to do just that, a historic move that will be weighed by Ireland’s new elected officials next year. Furthermore, legislators will introduce legislation to allow supervised injection facilities next year. The fight in Ireland is far from over, however, as upcoming elections threaten to change the balance of power. 2016 brings other key moments for international drug policy reform, and SSDP members from around the globe will be representing the youth voice at major United Nations events such as the Commission on Narcotic Drugs and General Assembly Special Session on the World Drug Problem. In 2012, it seemed impossible that Ireland, a country without a reform movement, would decriminalize all drugs, but now it is poised to join Portugal as a leader in sensible drug policy. Your gift today won’t just be doubled: it will contribute to making the impossible a reality in Ireland, the US, and beyond.