HomeBlog Who Needs the AMPLIFY Project?

Who Needs the AMPLIFY Project?

Who Needs the AMPLIFY Project?

This blog was written by Evan Eisenberg, Founder & President of USF SSDP, as well as FL Regional Organizer for the AMPLIFY Project.

I have always felt that the AMPLIFY Project is a vital asset to SSDP’s outreach, but recent events and conversations lead me to feel the need to reiterate the importance of the AMPLIFY Project to SSDP members and staff. My chapter would not exist if I did not participate in AMPLIFY events and I would not have had the support of dedicated young members needed to host the FL Regional SSDP Conference at USF or become the first established chapter there to receive recognition and funding.

My exposure to the AMPLIFY Project and the success of my chapter is not a coincidence. My chapter was founded by older students in Spring 2012 so many graduated at the end of our first semester, a couple of members helped table at the 13 USF orientation sessions but we had no meetings over the summer and had only worked on goals related to organizing our chapter. Our only event that Spring and Summer was our first experience with AMPLIFY: Slightly Stoopid/311 at the 1-800-ASK-GARY Amphitheater in July. 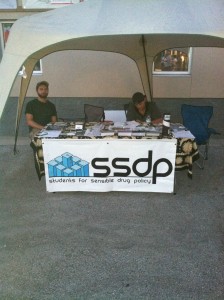 Our members lost touch over the Summer and recruiting first year students was a priority for the survival of our chapter. Numerous first-year students at orientation expressed interest in tabling at events like the Slightly Stoopid/311 show and we promoted the show while recruiting new members based on our involvement. I sent out emails to the people who expressed interest during orientation about our first meeting of the Fall semester. That evening, I anxiously approached the 3rd floor of the Marshall Student Center. As the start time approached, I sat surprised as nearly 20 people came in. We sat in a circle and I looked around a room full of new faces, only two of whom were recognizable (my first treasurer and secretary).  Our VP graduated but managed to stay in touch but was unable to attend. Not all of our members had graduated; most were not in attendance at the meeting but three of us were.

Why did we three return? We weren’t great friends before SSDP and did not have very much in common. The only thing we did have in common was that we had all attended the Slightly Stoopid/311 AMPLIFY show together. We had spent time together working and talking to people at an AMPLIFY show with 12,000+ people of all ages. While tabling at the show, we learned why drug policy reform mattered to each of us and came to understand the commonalities that drew us together towards a common goal. Priceless moments unfolded in front of our table throughout the night such as: A young couple talking to us about SSDP while the mother pinned a “War on Drugs is a War on Us” button on their young son; security guards grabbing SSDP teddy bears to give to their kids; and college students on vacation talking to us about starting a chapter at their school. 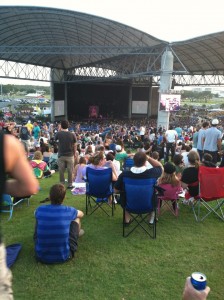 Slightly Stoopid/311 at the 1-800-ASK-GARY Amphitheater

We shared an experience filled with good vibes and talked to hundreds of people about the importance of our mission as well as the need to involve young people in political activism. What better team building and bonding experience could you ask for? Before that show, the only work we had done involved filling out forms to gain chapter recognition from USF. When we were presented with the opportunity to table at EOTO last semester, I brought two members who were new both to our chapter and to AMPLIFY. Ever since that show,  they make it to all our weekly meetings and work proactively on our goals. Every person I have brought to an AMPLIFY show leaves more connected to the chapter because their beliefs on drug policy reform are validated by important people that they look up to in the live music community 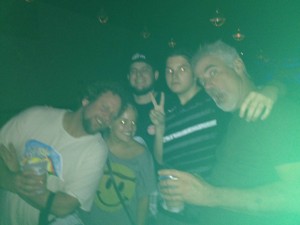 When done well, each AMPLIFY show represents a significant outreach opportunity that provides good opportunities for fundraising and networking.  Our increased presence at popular festivals furthers our goals of direct harm reduction and getting people to know our organization.  With a truly attractive table or booth staffed by friendly SSDPers, it is easy to get a few dozen email addresses, tons of signatures (people like to sign things) and donations at each show– plus you get to enjoy a great show!  Once the headliners go on, your job is basically done and it’s time to have fun.  The members in my chapter who have tabled at at least one AMPLIFY event do not leave the organization and are always extremely energized by the experience.  AMPLIFY events are a significant contributor to the success of SSDP. 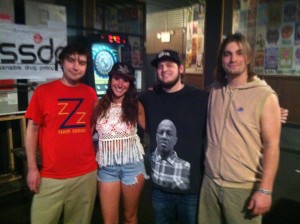 AMPLIFY is not only important to attracting and retaining new members, but long-time reformers can help prevent burn-out by getting involved. Not all benefits of the AMPLIFY Project are easily quantifiable.  They can be hard to explain to someone who has not attended an AMPLIFY show but trust me when I say it is a vital part of many chapters, like mine. Having famous, talented artists tell you that you are really doing the important work at their shows by providing people with information on how to get involved in drug policy reform is an incredible feeling. Go to an AMPLIFY show  and, in the very likely chance you meet the band, they will surely tell you how happy they are to be involved. I’ve had off-duty cops working security at shows tell me they appreciated that we were helping to keep everyone safe and, through these interactions, SSDP-USF has continued building our very positive reputation in the community and on campus. 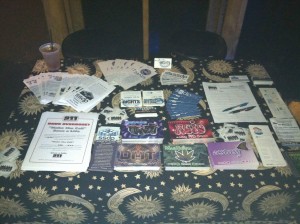 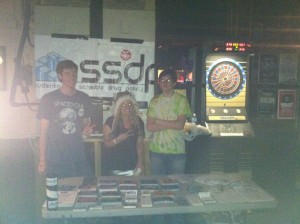 AMPLIFY is an invaluable resource that every chapter should take advantage of when presented. It is the best outreach tool that SSDP chapters have at their disposal and it prevents burn out by keeping members energized and giving SSDPers a chance to talk with a number of different people with varying viewpoints, practicing the skill of meeting people where their beliefs are and working from there. The discussions you will have are likely to keep you grounded and more prepared to talk to regular people about why drug policy is important. Loud music often makes an effective elevator pitches a necessity at shows.

Drug policy reform is always easier when working with friends, and AMPLIFY helps facilitate these long-term friendships  between members. What is better than using live music as an outreach tool to young people to talk with them about drug policy reform? Music is an essential part of our movement’s history and will continue to play a role in it’s future. Music has played vital roles in countless social justice movements before and now AMPLIFY is helping provide the soundtrack to the downfall of prohibition. Support drug policy reform and harm reduction, support live music, support independent artists and support AMPLIFY!