Why Filipinos are Fighting Back Against Plans to Drug Test Children

Category: Blog/International | July 26, 2018 By Jake Agliata No comments yet

By Aaron Minsoo Kang ‘18, SSDP Philippines Earlier this month we announced the launch of the International Activities Fund, which will assist SSDP activists around the world who don’t have access to the same resources often used by young people in the United States. We exceeded our initial $10,000 goal and are now aiming to raise $20,000 to kickstart the fund. Today, we want to share a story from Aaron Minsoo Kang ‘18, a seventeen-year-old SSDP activist in the Philippines. President Rodrigo Duterte’s anti-drug campaign has threatened many lives in the Philippines and could now possibly impact children. As schools opened last month, the Philippine Drug Enforcement Agency (PDEA) proposed to conduct drug testing on students as young as ten years old. This proposal would violate the Comprehensive Dangerous Drugs Act of 2002, which authorizes drug testing only for secondary and tertiary level students. This demonstrates that the PDEA is willing to renege on the country’s laws as part of their solution to the drug problem. According to human rights groups, more than 20,000 extrajudicial killings have taken place as part of the Presidents anti-drug policies. Given the President’s public death threats against people who use drugs, children would now be more vulnerable in a dangerous environment. 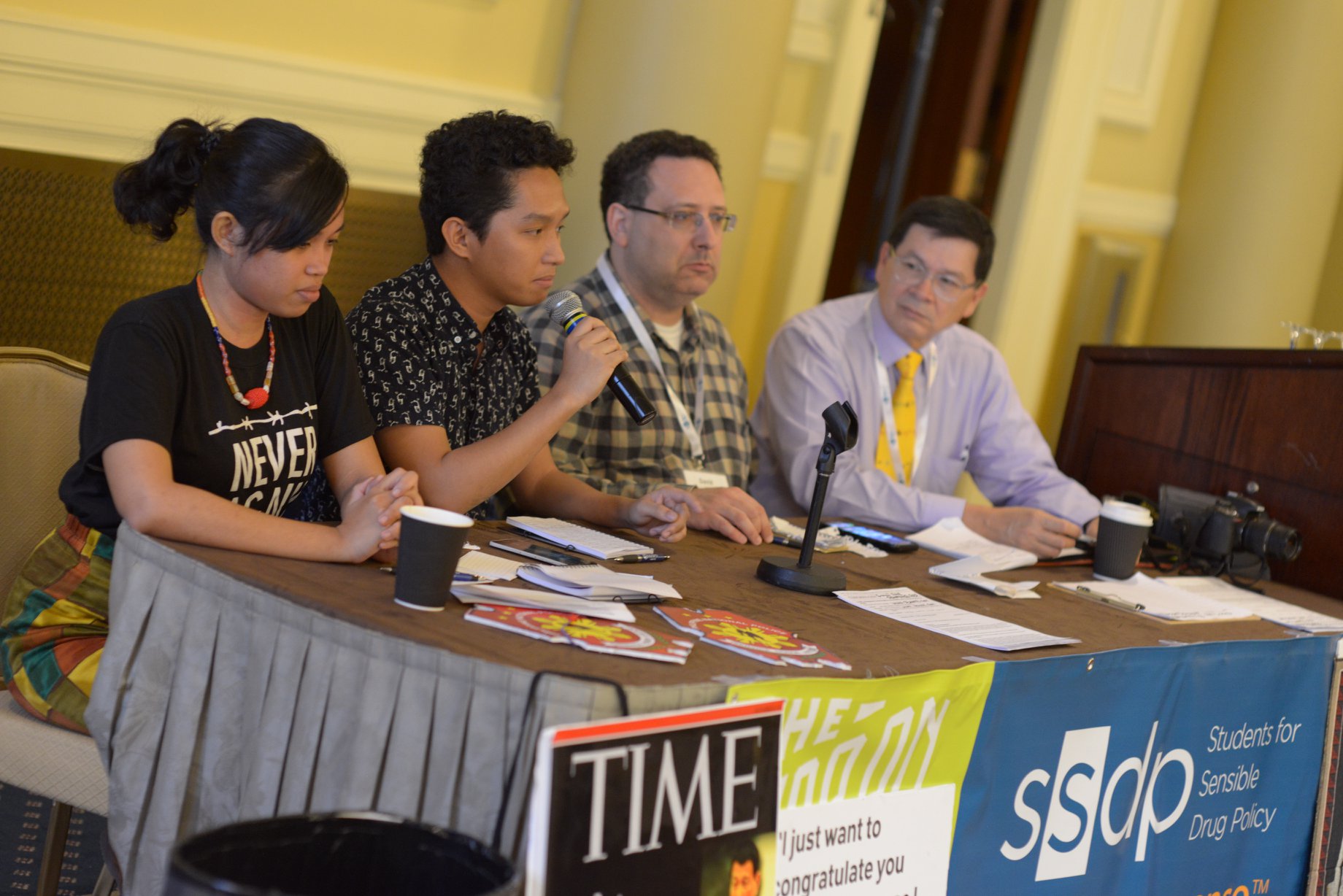 SSDP activists from the Philippines, Justine Balane ’17 and Shamah Bulangis ’17, speak about their work fighting the drug war at #SSDP2018.

The Office of the President and the Department of Education has released statements rejecting the PDEA’s proposal. But both offices are in a bind as they scramble to turn down drug testing fourth-grade students while justifying the same punitive drug testing policies for high school students. Parents and youth leaders from opposition group Akbayan protested outside elementary schools across Metro Manila on July 5 to oppose the policy. They claim that children would be traumatized and afraid to attend school or participate in school activities because of the punitive drug policy. According to a Rappler report, one parent protesting in Quezon City said: “Parents know that when children are in school, they’re supposed to be safe, nothing bad will happen to them…my son himself said he’s scared to go to school.” Here’s why Filipinos are fighting back against plans to subject grade-schoolers to drug testing: Fortunately, many advocates are fighting against this proposal. Senator Risa Hontiveros is pushing for harm reduction and community-based health services. There are high hopes for the recently-passed Mental Health Law to equip health services providers to care for people with drug dependency, helping to remove the stigma of people suffering from drug dependency and its symptoms. This way, youth can safely seek help for their mental illness and addiction without feeling vulnerable to potential death threats. More actions must be taken to keep children safe because they are the future of the Philippines. Drug testing children will not accomplish this and should be out of the picture. Aaron MinSoo Kang, 17, is a student in Manila. He is a volunteer for Students for Sensible Drug Policy (SSDP) in the Philippines.