HomeAction Blog Why Hasn’t There been Any Justice for the Victims of Ayotzinapa?

Why Hasn’t There been Any Justice for the Victims of Ayotzinapa?

Why Hasn’t There been Any Justice for the Victims of Ayotzinapa?

Two weeks ago, we published a call to action on the 23 month anniversary of the disappearance of 43 students from the Ayotzinapa Rural School. Today, SSDP Latin America Policy Intern Jacki Moreira takes a look at why investigations into the disappearances have yielded no results or arrests.

El Grupo Interdisciplinario de Expertos Independientes (GIEI) were conducted one of the only external investigations into Ayotzinapa before their inquiries were halted by the Mexican government.

As mentioned in the previous blog post, the GIEI was an independent, international investigative body whose inquiry into Ayotzinapa was halted by the Mexican government. Something that was fundamental for the GIEI was to remove the control of the investigation from under the SEIDO (the organized-crime division of Mexico’s Office of the Attorney General). This agency stalled, mismanaged, and released false reports that were found to have no factual basis. The fragmented case files and withheld information meant the investigation was essentially under their control. Once the investigation was moved from control of the SEIDO however, there were still delays and blocks. The Attorney General denied them the ability to interview or reinterview state authorities who exercised their function during the night of the events. They also were not given access to interviews with military officials, and their request to turn over all documents, videos, and photos that could be used as evidence was refused by authorities. They were refused interviews with the indictees which could have offered information about the facts or fate of the disappeared.

One of the primary demands of the parents and families of Ayotzinapa victims is the firing and imprisonment of Tomás Zerón. Zerón leads the Agencia de Investigación Criminal and is known as the author of the state’s “official story,” along with the former Attorney General Jesús Murillo Karam. Zerón is implicated in the torturing of witnesses, obstructing the investigation, and fabricating evidence to corroborate the official story. Zerón continues to break protocol and legality in his handling of the case. When he presented a bag with a bone fragment from the Rio San Juan, he lied about the presence of UN officials, took one of the tortured witnesses with him to the site on the day of his confession, and never presented the original videos or pictures to the GIEI. The independent investigators were sent by Zerón instead to the Coluca trash dump. Furthermore, at the site, cars from his agency blocked the path of the Argentine Forensic Anthropology Team. The government’s efforts to continuously push the investigation back to its own story is an attempt to bury the truth and prevent justice. 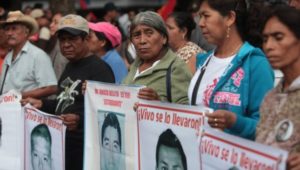 Families of Ayotzinapa victims are calling for the arrest of Tomás Zerón for falisfying information in his investigation.

The GIEI’s investigation into the fifth bus of Ayotzinapa students, which was not included in the state’s investigation, revealed the direct participation of federal police the night of the attack. The driver of this bus claimed that they stopped at the bus station and switched buses. The normalistas, however, said the bus kept going until it was stopped by two federal police cars. In the area of the courthouse, very close to where the 5th bus was detained, there was also federal police present. The story of the normalista students was confirmed both by records of the C-4 communication system and by workers of the bus line. The GIEI believe that the driver was either involved with the police or forced to give false testimony Jose Luis Abarca, the mayor of Iguala who the PGR initially attributed full responsibility for ordering the attack on the normalistas, resigned and fled days after the disappearances. The Mayor was used by the federal government in an attempt to stop the investigation there and depict it as a purely local matter involving one corrupt mayor. In interviews in 2015 with Anabel Hernández for the magazine Proceso, Abarca and his wife deny involvement with the Guerreros Unidos, ordering the attack,and María de Los Ángeles Pineda Villa claims to have been tortured and denied her rights and liberty in prison. In La Guerra que nos ocultan, the authors also reveal that the cell phone of Julio César Mondragón Fontes, a normalista that was killed and found the next day with his face peeled off, was active up to 7 months after his death. Phone records show that there was established communication signals from a military camp, Campo Militar Uno in Mexico City and from the Centro de Investigación y Seguridad Nacional (CISEN), the Mexican intelligence agency, months after his death. This proves further the involvement of the military, despite their denial of any knowledge or participation in the attacks of Iguala. The active cell phone signals hours, and in some cases days after the disappearances, further contradicts the official story that the students and all their belongings were burned in the trash dump in Cocula. The GIEI writes that their expulsion only strengthens the lack of confidence in the institutions of the Mexican government. They argue that if the federal government can, in the presence of an internationally supervised body, still act with such levels of impunity, omission, and intentional interference and delay, it is indispensable to continue with a mechanism of international oversight until justice and truth are reached. For more information on Ayotzinapa, including ways you can take action this September 26th on the two year anniversary, check out SSDP’s organizing guide: http://ssdp.org/assets/SSDP-Ayotzinapa-Organizing-Guide.pdf