Amongst all of the amazing things that happened for drug policy reformers nationwide this week, another sensible policy was passed that you may not have heard about. Our students at Eastern Michigan University crafted a city-wide ballot initiative to pass a lowest law enforcement priority for marijuana in the city of Ypsilanti. Over the past semester they gathered the signatures to get it on the ballot, and saw it through with canvassing and educational campaigns within the Ypsilanti community. Not only did it pass, but it passed by an impressive margin of 74 percent! Results showed 5,635 voters, 74 percent, favored the marijuana proposal and 1,914 were against it. Now, police will be able to redirect police efforts from enforcing laws against marijuana use, and instead focus on serious crimes. This is a huge step forward for EMU SSDP and for the city of Ypsilanti. Sensible drug policies start at home, and this is what EMU SSDP focused on for the past semester, and we are so happy to see it come through. They worked with community activists and leaders in order to make this happen, and they did a great job! Take note, SSDPers. This is a great way to get involved in changing your local laws, and make a difference in your community by introducing sensible dialogue and policy into the conversation. Chapter leader Miles Gerou had this to say about the policy win:

“For myself, I think it was really great, because in my opinion this election will mark the beginning of the end for Marijuana, and to be able to say myself and EMU SDDP played a small role in the greater marijuana push this election to really make change happen is awesome! Also, hopefully what we did will save someone from getting a possession charge, and all of the injustice that comes with that–especially losing student loans.”

You can read more about the initiative and the fight for reform in Ypsilanti here. 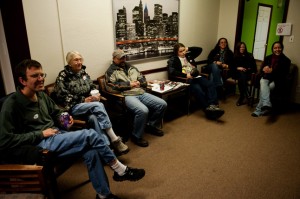 Supporters of the Ypsilanti marijuana initiative waited for results at the 3rd Coast Compassion Center at 19 N. Hamilton St. in Ypsilanti.