Making Noise in the South

Making Noise in the South

Recently, I took an autumn drive from Atlanta to Tallahassee, Florida, in order to help stakeholders lobby for sensible Cannabis reform at Florida’s State General Assembly. While cruising down an old state highway in Southern Georgia, lined with colorful leaves and farms whose abundant crops were ready for the harvest, I began to ponder the importance of Cannabis in the Southern United States.

As a lifelong Southerner, I have witnessed first-hand the negative effects of failed drug policy. The drug war disproportionately affects poor people and people from marginalized communities. Data indicates that these disparities are often greater in the Southern States. In my neck of the woods, what is legal to buy, smoke, and sell in other latitudes and longitudes will get a SWAT Team visit to your home, as well as a lengthy prison sentence.

Despite the changes in latitudes, the public attitude among southerners demonstrates overwhelming support for Cannabis Reform. In Florida (if you consider Florida in the south), medical use was legalized in 2016 by way of a constitutional amendment. Appearing on the ballot as Amendment 2, the initiative was approved with 71% of the vote.

Florida’s advocates have faced many obstacles in obtaining safe access to Cannabis. One Tallahassee judge called the state’s licensing process “a dumpster fire.” Florida’s political nature has allowed for a highly limited medical cannabis market ripe with many problems. 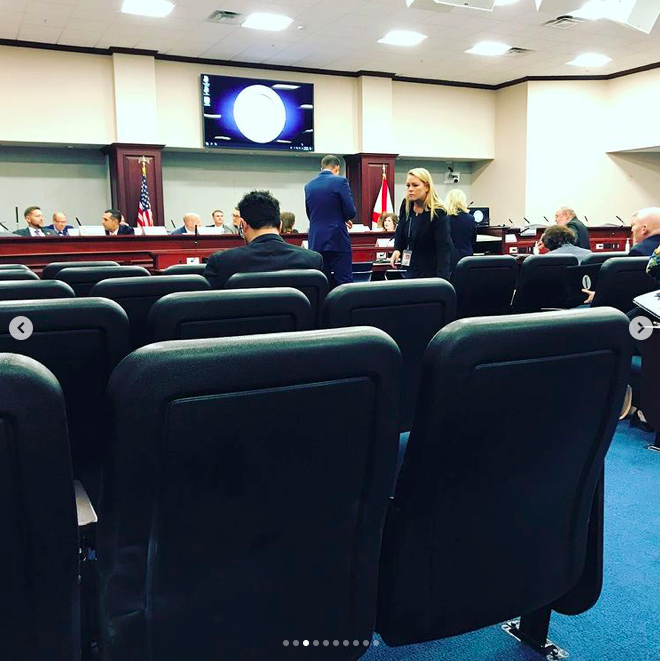 Florida’s legislature and state politics are dominated by Republicans who have not made it easy to enact sensible cannabis reform. Some of Florida’s politicians have done everything to thwart the emerging legal Cannabis market by using scare tactics, shady political maneuvering, and behind-the-scenes deals. Despite the horrid nature of Florida’s State politics, advocates are slowly but surely laying the foundations of a legal and regulated cannabis market.

Florida for Care’s Executive Director Eric Stephens (SSDP Alumni from the University of Miami, 2015) invited SSDP to come and assist them at the state capital on October 5th, 2021. The purpose of this lobbying event was to bring stakeholders and legislators together in order to educate them about problems with Florida’s Medical Cannabis System.

Stakeholders and advocates meet with their public servants to voice their concerns about Cannabis Regulations and Legislation. According to Florida for Care’s ED, “despite making permanent such pandemic-era innovations as “beer to go,” Florida lawmakers haven’t acted to codify a recently expired policy allowing medical marijuana patients to renew their certifications virtually.” Additionally, advocates were focusing their efforts to help prevent the passage of “THC Caps”, which limit the potency of legal cannabis. Other objectives of the lobbying event in October included, educating legislators about employee protections for cannabis patients, expanding access to medical cannabis for more conditions, and overall improvement of Florida’s Medical Cannabis Program.”

The daylong event started off with breakfast with the Comptroller for the Florida Health and Human Services Office of Medical Marijuana Use (OMMU). The OMMU is charged with writing and implementing the Department of Health’s rules for medical marijuana. The OMMU’s Comptroller was able to give us insightful advice about what policies and actions were needed to improve Cannabis regulations in Florida.

After speaking with the OMMU’s comptroller, advocates were escorted across the street to a legislative hearing on Medical Cannabis being held in a State Senate Committee Room. From there, advocates and doctors met with legislators from both halls in their offices. All the legislators were invited to a Cannabis Industry get-together being hosted by Florida for Care later that evening at a historic mansion juxtaposed to the state capital.

The Industry party afterwards was a success, and as many as 50 – 60 stakeholders hung out, ate, drank, and talked politics that night. The group included patients, doctors, business owners, and criminal justice reform advocates.  Several legislators came by and spoke with us offering more insights into Florida’s politics, as well as forecasting the future of Cannabis Reform in the state.

In retrospect, Florida’s political realm is cutthroat and problematic, but I encountered many honest and respectable advocates during my brief visit. Patients were worried about efforts to limit their medicine, doctors expressed concerns with prescription drug delivery rules pertaining to mailing medicine, and business owners scrutinized over regulations and other red tape that they face daily while operating their medical cannabis companies. The daylong event was an initiatory fire bathe into Florida’s Cannabis Reform movement. I was able to gain knowledge about their cannabis industry and wisdom about how politics work in the state. Afterward, I was able to reflect and further envision SSDP’s role in our future efforts in Tallahassee.

FYI: The Florida State Legislature Building is designed for people to get lost in !!!